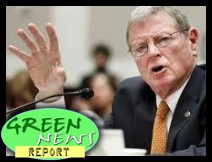 Hey Brad, just caught you on RT, very cool. You have my sympathies that you had to lower your IQ 50 points to debate that buffoon Seton.
I couldn't believe his lame assumptions/arguments.

Ex: If O'keefe can intentionally fraudulently vote it proves fraudulent voting is occurring. All i could muster was a HUH?? And most of his arguments used the same tact.

'Hard to have abattle of wits with an unarmed man'

"Climate change is occurring … and poses significant risks to humans and the environment," reports the National Academy of Sciences. As climate-change science moves in one direction, Republicans in Congress are moving in another. Why?"

Why? Because they are well aware that a 5,000 year old flat planet cannot have anything "global", because that it is an unbelievable shape for wise guys who have flatulence.

BetterThanNoSN - Thanks for the vote of sympathies. Good god.

For those who missed it, I've now posted video with whack-a-doodle Seton Motley on RT TV right here.