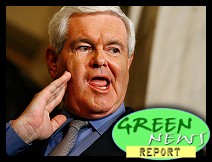 IN TODAY'S RADIO REPORT: Obama fires back at GOP over rising gas prices; Incredible rightwing hypocrisy on pain at the pump; Newt's hypocrisy on algae biofuels (Thanks, videotape from 2008!); PLUS: Abandoning Kiribati: the world's first climate change refugees ... All that and more in today's Green News Report!

IN 'GREEN NEWS EXTRA' (see links below): James Hansen: Why I must speak out about climate change (video); Iceland to turn CO2 into rock; Euro Car of the Year: Chevy Volt; Iowa outlaws undercover journalism; US pollution also Made in China; Spiders invading flood-stricken Australia; Alien species invading Antarctica; Carbon emissions threaten world's oceans ... PLUS: What if the Fukushima nuclear fallout crisis had happened in the US? ... and much, MUCH more! ...

Finally, somebody has confirmed another very real problem with fracking.

As evidenced by this article all geologic fracture lines are not mapped, and the consequences of fracking practices may have very unsettling effects.