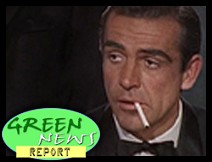 
Then, a few days later, a skeptical farmer in Onami, who wanted to be sure his rice was safe for a visiting grandson, had his crop tested, only to find it contained levels of cesium that exceeded the government’s safety limit. In the weeks that followed, more than a dozen other farmers also found unsafe levels of cesium. An ensuing panic forced the Japanese government to intervene, with promises to test more than 25,000 rice farms in eastern Fukushima Prefecture, where the plant is located.

Thanks for the links to the rest.

I tried to watch SOTU address for 15 minutes...could not stomach any more BS.

Obama is a corporate lackey. A Wall Street Democrat.

The only hope I see for the U.S. is Rocky Anderson. The new Ralph Nader.

Awww, thanks so much, Ralph, very much appreciated!

The SOTU got better as it got rolling --- at least for clean energy peeps. BIG section covering energy is worth reading if you're interested. Easier to read than watch anyway!
http://www.cnn.com/2012/...se-transcript/index.html

Mitch Daniels gave the GOP response. It was funny and a little creepy:
http://www.cnn.com/2012/...se-transcript/index.html