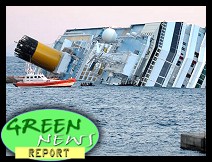 IN TODAY'S RADIO REPORT: The owners of the Keystone XL pipeline confirm the Republican/Fox 'News' lie about the number of jobs it will produce; Italian cruise ship crash threatens to become an environmental disaster as well; Two offshore oil disasters for Nigeria; PLUS: Despite concerns from the U.S. Coast Guard, it's full speed ahead for drilling in the Arctic ... All that and more in today's Green News Report!

IN 'GREEN NEWS EXTRA' (see links below): Peak coal: a 'crisis in the making'; ‘Congress is effectively controlled by climate change deniers’; Unlocking the secrets behind fracking; Bulgarians protest fracking; Scientists link farm pesticides to mass death of bees; Loggers 'burned Amazon tribe girl alive' ... PLUS: 'Half a degree': good news for the climate ... and much, MUCH more! ...


Sergio Ortelli, the mayor of the small Tuscan island of Giglio where the cruise ship grounded last Friday, said on Monday that "this is an ecological timebomb".

I watched Frontline last night and their program on Nuclear Aftershocks and was just shocked when I learned they have a 10yr plan to just get into the buildings that house the reactors.. 10yrs!

Fukushima radiation is increasing and spreading around the world.