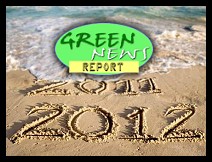 IN 'GREEN NEWS EXTRA' (see links below): 12 simple steps for going green in '12; Iran could disrupt but not halt oil traffic in strait; Oil giant Chesapeake behind fracking 'land grab'; "People die from hunger while banks make a killing on food"; Whistleblower: Keystone XL a potential “disaster”; US shale gas reserves wildly overestimated; 'Pay-As-You-Go Solar' for India ... PLUS: Yes, you can have 24-hour solar energy, even after the sun goes down ... and much, MUCH more! ...


Halliburton, the company that cemented the doomed well, had asked a court to force BP to recognize a contractual agreement that protected Halliburton against possible spill clean-up costs.