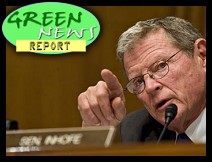 IN TODAY'S RADIO REPORT: Triumph of propaganda over truth: D.C.'s King of the Deniers, Sen. James Inhofe (R-OIL) takes a victory lap; Deadlock at Durban? Final days of the UN Climate Conference in S. Africa; 2011 breaks its own record for weather disasters; PLUS: GOP threatens to take another hostage to push the Keystone XL pipeline ... All that and more in today's Green News Report!


Among the most influential of the new breed of so-called super PACs is the tea party group Americans for Prosperity, founded by David and Charles Koch, the principal owners of Koch Industries, a major U.S. oil conglomerate.
...
Tim Phillips, president of Americans for Prosperity, says there's no question that the influence of his group and others like it has been instrumental in the rise of Republican candidates who question or deny climate science. "If you look at where the situation was three years ago and where it is today, there's been a dramatic turnaround. Most of these candidates have figured out that the science has become political," he said.
...
Groups like Americans for Prosperity have done it."

Thanks for the short summaries, it's easier to catch up with the news this way.

If I could appear before Inhofe, I'd be tempting to use the words used during the infamous Joseph McCarthy hearings.

Senator, have you no sense of shame?