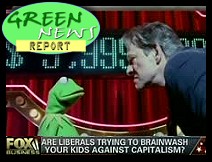 IN TODAY'S RADIO REPORT: It's not easy being green!: Fox 'News' goes to war with Kermit T. Frog!; Crunch week at UN climate talks; Million-dollar fines for Massey Energy's WV coal mine disaster; PLUS: Protesting the World Bank's major coal projects ... All that and more in today's Green News Report!


But unlike a previous government deal with Massey, the deal does not resolve any potential criminal violations by any officers or agents of Performance Coal or Massey, sources said.

Why I Don't Listen To The News:

Said that Canada was coming across as the bad guy because it didn't want to sign anything unless the big polluters signed on as well. Let's see, who were the big polluters mentioned? China, India....maybe a couple of others....

Guess who WASN'T mentioned? Thass right, the good ole USA. Not a peep about US from our good ole public radio station.

That is a symptom of Stockholm Syndrome, which has replaced the soul of free America.

It is certain that ecocide has been institutionalized in America as we speak.

[ED NOTE - 'GREEN POLICE': We've tried to be tolerant of your lengthy, often incoherent comments and lists of often unexplained links here. We are allowing the following two comments to go through (though I've removed two long long lists you included in them, to try and make this more readable). We've asked before --- even via email, but you give a fake address, so we can't contact you, to stop hijacking threads. That's why you've been put on the "Moderate" list. If you have a comment, which agrees or disagrees with us or anyone else, feel free to post it. But you are NOT allowed to hijack entire threads with 1500 word, incoherent rants and unexplained links. That's just disrespectful to everyone here, and to us, as we try to keep this an open and manageable forum for discussion for everyone. Thank you for respecting that. If you can't, then your comments will not be approved in the future. Please consider this your last warning. We are under no obligation to allow your posts here, as I'm sure you appreciate. - BF]

It's man made climate change alright, and geoengineering isn't the cure, it's the cause.

Instead of geoengineering being labeled this way and the public recognizing this, first it was kept secret from the public, and now instead of being kept secret, in a reversal, it's now openly one of the UN's "solution to the problem" , A problem they created with geoengineering in the first place. A problem that also dumps a number of nasty things into the atmosphere, far worse than exhaust from a car.

So go ahead Greens, Bradbloggers, keep pushing this crap, you'll get just what you want less C02, but at the expense of having plenty of worse crap in the air.

Take the health effects of exposure to sulphur. One SINGLE ingredient out of many used.

The Navy is now conducting open air testing in California, Oregon and Washington coast line. They are now using a whole host of TOXIC CHEMICALS including some banned by the Geneva Convention, like Red Phosphorous. The Navy and Air Force toxic chemical list includes, but not limited to:

The people of California need to:

* Demand public investigation of chemtrails spraying in California
* Demand an immediate cease to all chemtrail spraying until we know the short and long term effects of chemtrails on the general population.
* Introduce legislation to create “No-Chemtrail Spraying Zones” in California.
* Give immunity and protection to anyone willing to blow the whistle on chemtrail operations.
* Boycott products made by any companies who make or produce chemtrail related products.
* Identify who is responsible for allowing us to be sprayed on the city/county/state/global level.
* Demand that each city/county/state be given a 72 hour warning before spraying so people can choose to protect themselves.
* Demand an explanation for chemtrail spraying on the city/county/state/congress/senate levels and do not accept the denial that spraying is going on.
* Prosecute anyone who continues to aid these illegal chemtrail operations and hold those companies responsible that produce toxic chemicals, toxic metals, biological toxins, and any other submicron particles that cause chemtrail related diseases that effect the general population.

Investigations and inquiries on the state level and above are being ignored and chemtrail spraying is being denied at the highest levels of our government. The only way to halt chemtrail toxic spraying on us is for the general population to wake up and demand that it stop.

When a free people no longer have a say in the air that they breathe, they are no longer free. Think about it, someone or some group of persons, non-elected, now have the power over the air we that we breathe in on a daily basis. They are now deciding what to put in the air and therefore are affecting our overall health and wellness. This means that we are potentially “one spray” away from a potential disaster that could kill/contaminate everyone in the U. S. and all NATO countries. What will happen if an enemy country gains control over these toxic sprays? If you see a chemtrail above your head you are now at risk.

Lora #1, beside the BradBlog, if you want comprehensive coverage of world events...go to DemocracyNow!.org...today, and yesterday, extremely potent and necessary comments from those peoples affected by climate change...as we witness the effects of climate change, happening, right now! Watch the participants that are effected.

BTW, NPR, PBS...all dominated by corporations. Notably the Kock (I spelled it wrong on purpose) brothers, the mining industry, the oil industry, And all the other polluters. Yet, PBS asks for our donations...yes, by all means fund your own demise, citizens of America!!!!

While we are waiting...

These are not the press releases you were looking for.

"Yesterday we learned that another DOE subsidy recipient, Beacon Power, has joined the much-maligned Solyndra in bankruptcy court"

"New York-based Ener1 received a $118.5 million grant to expand its manufacturing operations in Indianapolis, Ind., run by a subsidiary EnerDel, which received a visit from Vice President Joe Biden earlier this year."

Forget Tessla for a moment.

So, Where Are the Green Cars?

Shall we look at Government Motors? GM? Is your new Chevy Volt so hot that it's literally catching on fire? Good thing they only sold 6000 of them.

SunPower is currently on track to become the second embarrassing failure in the DOE’s loan portfolio. It is deeply in debt, and company executives recently announced plans to lower its earnings projections for 2011 even further.

Evergreen Solar Inc is a "Massachusetts company that the White House once said 'is hoping to hire 90 to 100 people' thanks to stimulus money has $485.6 million in debt. Evergreen closed a factory in March, reports the Boston Herald, and cut 800 jobs. A Michigan plant is to be shut down, as well, causing the loss of even more jobs."

"Green Vehicles of Salinas, Calif., which has burned through more than $500,000 in money 'invested' by the city, folded last month without having produced anything of significance. The company promised it would employ about 70 and pay back Salinas taxpayers with $700,000 a year in city taxes."

In Seattle, "a $20 million federal grant for home weatherization has, according to KOMO news, retrofitted only three houses and created 14 jobs in more than a year."

Notwithstanding its February 2009 bankruptcy and default on a $58 million loan from BNP
Paribas, Wisconsin- based, ethanol-oriented Olsen's Mill Acquisition was stimulated with $10million in January 2010, along with Olsen's Crop Services. ADM purchased the defunct operation's assets last month.

Unless something environmentally drastic happens that hit the purse of corporate America, we can't expect green policies that are actually effective.

Thanks all for the comments.

For those who genuinely desire to further their understanding of the current state of climate science, please go to Skeptical Science.com, a comprehensive database of primary scientific evidence that rebuts ALL of the climate change denier arguments, with easy-to-digest explanations for non-scientists.