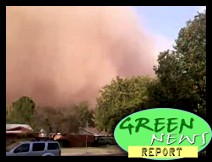 
“Every minute is critical from now on,” he told a televised press briefing late yesterday in which he asked for 1.2 million sandbags.

Effects, effects, effects. That's all you copy and paste artists give us and never do you give us convincing stories about "causes". It’s always implied that the consensus is the same as proving the cause, but studying the effects of a crisis that is assumed to happen for 25 years proves exaggeration, not consensus.

Oh Meme Mine, there you go again.

It helps if you bother to actually read the articles linked above. If you're genuinely interested in the "causes" as you put it, go to SkepticalScience.com for the theoretical and empirical basis. You'll find the primary scientific literature and explanations for non-scientists, that explains how direct observations and field data demonstrate the human fingerprint of human-caused climate change.

But based on your previous comments here and pasted all over the internet, I suspect that you won't find the actual primary scientific evidence "convincing". You don't seem to care much about the validity of the basic laws of physics or chemistry. Or the fact that these climate change effects are happening now, (not "25 years" from now) exactly as climate scientists predicted years ago --- only the impacts are manifesting faster than they predicted.

Still waiting for ANY evidence from you or anyone else proving otherwise! "Because I said so" doesn't count!