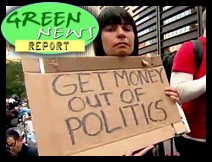 IN TODAY'S RADIO REPORT: Coal is a drag on the economy; Coast Guard said 'NO!', but Arctic drilling a 'GO' anyway; Surprise! Koch Industries lied about profiting from Keystone XL Pipeline; PLUS: Occupy Wall St. protesters rally to save the future with action on clean energy & climate change ... All that and more in today's Green News Report!


Once you strip away the econ jargon, the paper finds that electricity from coal imposes more damages on the U.S. economy than the electricity is worth. That's right: Coal-fired power is a net value-subtracting industry. A parasite, you might say. A gigantic, blood-sucking parasite that's enriching a few executives and shareholders at the public's expense.