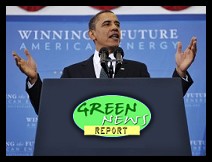 IN TODAY'S RADIO REPORT: Obama's 'new' blueprint for energy security --- not so 'new' after all; Offshore drilling --- not actually 'safer' after all; US falls further behind in the global clean energy race; PLUS: The 'Chernobyl Option' for Japan's nuclear reactors at Fukushima, as radiation continues to spike and spread ... All those disasters and more in today's Green News Report!

The Blueprint is aimed to:

* Develop and secure America’s energy supplies...
* Expand Safe and Responsible Domestic Oil and Gas Development and Production
* Lead the World Toward Safer and More Secure Energy Supplies
* Provide consumers with choices to reduce costs and save energy...
* Reduce Consumers Costs at the Pump with More Efficient Cars and Trucks
* Cut Energy Bills with More Efficient Homes and Buildings
* Innovate our way to a clean energy future...
* Harness America’s Clean Energy Potential so that 80 percent of electricity will come from clean energy sources by 2035
* Win the future through Clean Energy Research and Development
* Lead by Example so that the Federal Government models best practices and clean energy ······technologies

And Insurance companies don't sacrifice insurance premiums ($$$) for no reason.

...AND in the U.S. and other countries where smart meters are being installed, energy use is NOT decreasing, customer utility bills are INCREASING, there are additional problems and costs incurred from increased Security & Hacking problems and the meters are creating electrical interference problems, motion detector device interference and even starting fires in homes.

Wireless smart meters are NOT mandated by the Federal Energy Program.

Hi Brad,
Didn't know how else to alert you to the work of a courageous doctor in the Baton Rouge area who has been treating many workers on the BP-Oil Spill Cleanup and his comments about local hospitals' mis-diagnosis of illnesses showing up in that area.
http://vimeo.com/21370723
Perhaps you could contact him while working on the Mike Malloy Radio Show this next week
Sincerely
Doug Mayor