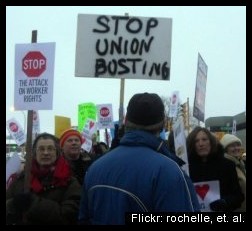 His remarkable display of contempt for the democratic aspirations of working class Americans comes as little surprise, unfortunately. Mica, during his time in office, has received more than $620,000 in campaign contributions from the airline industry.

The Mica clause would block a rule adopted by the federal National Mediation Board which, according to the Communications Workers of America permitted airline and railroad workers to achieve "union representation based on a majority of votes cast, in line with the National Labor Relations Act rules governing union representation across all other industries." Instead of accepting the rules of a democratically held election of workers, Mica wants to count those who are eligible to vote, but who fail to do so, as votes against unionization.

Over the dissent of three Republicans and every Democratic member of the Committee, the House Transportation Committee rejected "an amendment by Rep. Jerry Costello (D-IL) to strip Mica's anti-union language from the bill."

Mica's new definition of "democracy" underscores the observations we set forth in "Gov. Walker's Wisconsin 'Union Busting' Exposes 'Tea Party' Scam, Duped Americans" as to how so many working class Americans have been "taken in by the lies and deceptions of billionaire sociopaths, like oil-baron David Koch...[whose] aim is not liberty, freedom, and jobs but American fascism, corporatocracy, and the 'eternal subjugation of the common man.'"

That subjugation flows from the disparity of power that accompanies a growing disparity of wealth, which, in turn, correlates with the demise of unions in the U.S...

Union-busting and the 'hallmark of totalitarian society'

In responding to this latest assault on unions, Senator Tom Harkin (D-IA) observed:

Like [Wisconsin] Governor [Scott] Walker, advocates will describe these amendments as budget savers or pro-growth, but make no mistake, those are not their real goals. The real goal is to weaken the voice of American workers, and continue to push the same, trickle-down economic theory that has led us to unprecedented levels of inequality and instability.

Harkins' assessment, while accurate, understates the fundamental conflict between what Prof. Noam Chomsky described in Profit Over People as "neoliberal democracy" --- in which 80% of all individual political contributions are made by the richest 1/4 of one percent of Americans --- and "genuine democracy."

Chomsky observes that "to be effective, democracy requires that people feel a connection to their fellow citizens...A vibrant political culture needs community groups, libraries, public schools, neighborhood organizations, cooperatives, public meeting places, voluntary associations, and trade unions to provide ways for citizens to meet, communicate, and interact with their fellow citizens." On the other hand, "Neoliberal democracy", he explains, which places markets before people, community and the environment, produces consumers rather than citizens and "an atomized society of disengaged individuals who feel demoralized and socially powerless."

Union-busting seeks to eliminate collective bargaining in order to isolate individual members of society and render them politically impotent in the face of corporate wealth and power. It leads to political atomization which renowned political scientist Hanna Arendt described in her seminal work, The Origins of Totalitarianism as a hallmark of a totalitarian society.

Wealth disparity and the demise of unions in the U.S.

As the graph above suggests, the relative percentages of income going to the top one percent of Americans vs. the bottom 90%, just prior to the burst of the housing bubble and collapse of the credit default swaps casino in 2008, were strikingly similar to those that occurred in 1929 when the stock market crashed.

It is perhaps unfortunate that the second of these two graphs begins in 1948. The correlation between the decline in union membership and wealth disparity appears even stronger when one considers that "American union membership in the private sector has in recent years fallen under 9% --- levels not seen since 1932."

The correlation between low union membership and wealth disparity is enhanced by comparing U.S. unionization to that of other countries. By 1989, U.S. union membership, at 16%, was the lowest of any developed democracy, except France. By 2010 the percentage of private sector employees who belonged to a union had plummeted to 6.9% --- the lowest level since 1900 "when Samuel Gompers' fast-growing movement first counted a million members and 6.5 percent of the workforce."

"The U.S. income gap between rich and poor is the greatest among Western industrialized nations," according to the International Business Times. Sweden, whose workforce as of 2003 was 78% unionized, ranks third amongst all nations in income equality.

There are a number of poignant variables, of course. Outsourcing is one. So is a top income tax rate of 91% with corresponding low unemployment during the period 1943 to 1960 as compared to a top income tax rate of 35% with much higher unemployment during the period 2003 to 2010. Then, of course, there's the unique U.S. waste of public funds on Empire and the military-industrial complex. But it's safe to say that the unsustainable levels of economic disparity that accompany the demise of unions has produced predictable results.

Large numbers of Americans are experiencing economic hardships not seen since the Great Depression --- 46.3 million Americans live in poverty; 50.9 million have no health insurance; one in six Americans go hungry.

Compare that to the 400 wealthiest Americans who have recently experienced an 8% net worth increase, "to $1.37 trillion." In 2009, one hedge fund manager, David Tepper, received the equivalent of the annual salary of the President of the United States every 14 minutes. His $4 billion in earnings works out to $2 million/hour. All as corporations registered their highest profits ever in 2010!

A great deal has been written here at The BRAD BLOG about the existing U.S. health care system which is not merely corrupt and dysfunctional but so deadly that it kills close to 45,000 Americans each year simply because they can't afford coverage. That, in addition to the still uncounted numbers who die when carriers simply refuse to authorize vital procedures.

U.S. "unionization was 37 points below the average of seventeen countries surveyed" in 1987. By contrast, in 1990, 95% of Sweden's workforce was unionized.

Is it a coincidence that U.S. workers are required to work longer hours than any other industrialized nation? Is it just a freak of nature that the U.S. is the only industrialized "democracy" which does not have a single-payer health care system, but instead employs a corrupt, dysfunctional and deadly system at a per patient cost that is nearly double that of any single-payer country?

Is it any wonder that Rep. John Mica, Gov. Scott Walker, and Republicans across the nation are doing everything that they can to destroy unions, even as they accept unprecedented piles of cash from the very corporations who stand to benefit from the continuing anti-democratization of the American worker?

In Chomsky's 1996 'Class War' speech (see video below) he said: "One of the most effective democratizing forces has always been the labor movement. ... In countries that have a strong labor movement there is also a...strong correlation with a real live, functioning social contract that includes not only rights for working people but for people who need help and protection; for the defenseless, for children, for women, for families, for people who need assistance…There is also a culture that goes along with it --- a culture of solidarity and sympathy and mutual aid and support."

"In countries where unions are weak," he adds, "we tend to find 'tough love'...which means love for the privileged and tough for everyone else."

Yep, the morph of democracy into demockcrazy.

We should hold political elections to the same standards... no vote = a no vote... winning an election would REQUIRE 50%+1 of all eligible voters... GOD bless America... And good luck with that...

We should hold political elections to the same standards... no vote = a no vote... winning an election would REQUIRE 50%+1 of all eligible voters.

I found it tempting to make the same point, especially since it would mean that there was an empty chair in the White House over the past 50 years.

Consider, for example, the point made by Chomsky in Failed States that in "his landslide victory in 1984, just under 30% of the electorate voted for Reagan."

How about we count every voting eligible American who does not actually cast a ballot as a vote against every GOP candidate on their respective ballot (or ANY incumbent candidate for that matter, if one wants to be 'fair and balanced' about it).

Yeah, never mind that the ACTUAL STATUTORY LANGUAGE requires the vote of a majority of the "craft or class." But why should we bother with what Congress actually said in the Railway Labor Act?

Somewhat OT but combine this guy's excellent perspective with the union busting to see how well it all fits together:

Sorry its just a trailer, but I first saw him on Link TV and they may have a download at their site.

Retribution against walker and his union-hating cronies will be swift and severe.

I think voters would be wise to start looking at recalls to those s/elected to go to Washington, DC and serve in congress.
If there is to be true change and progress, we must first get rid of the electronic voting machines and that includes the machines that count paper ballots. As long as we vote on machines manufactured, programed and serviced by hard right wing corporations with an agenda, we will only have the illusion of an occasional victory while they make sure the balance of power stays in their favor.