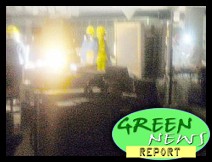 IN TODAY'S RADIO REPORT: Update on Japan's nuke crisis: Tap water warning lifted for Tokyo infants, but spreading elsewhere; Workers at stricken plant hospitalized for radiation exposure; Nukes now less popular in the US (for some reason); King crab invasion at the South Pole; PLUS: Japanese villages struggle to maintain tradition amidst disaster... All that and more in today's Green News Report!...

« PREVIOUS STORY "My KPFK Interview with VOA Asia Bureau Chief Steve Herman: Latest out of Fukushima & Tokyo"
» Go to The BRAD BLOG front page «
"'A Step at a Time, and a Few More Steps': Disturbing Science Behind Calm at the Fukushima Nuke Plant" NEXT STORY »