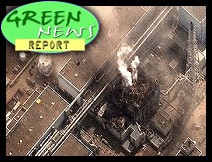 IN TODAY'S SPECIAL RADIO REPORT: Natural disaster, humanitarian disaster, and now man-made disaster, as 50 nuclear plant workers are all that stand in the way of full nuclear meltdown at Fukushima in Japan ... All that and more in today's Green News Report!

Then came the Japanese nuclear disaster, shocking the world with images of two explosions at the Fukushima Daiichi nuclear plant in northeast Japan, near the epicentre of Friday’s earthquake. The disaster threatens to end the nuclear renaissance. A slowdown has already begun.

one quake, one tsunami, two nuke plants...and japan
Imagine if it hadnt been japan!
Obama is still pushing the nuclear option...and you thought he was clever. A crisis is an oppportunity so they say in china, well here is an opportunity to get rid of nucler power forever. esp in quake zones. If rich tech-savvy quake-hardened tsunami-familiar japan is traumatised , how would any other nation fare?

some god news:
'The use of seawater indicates how serious the situation is, since it blocks any further commercial use of the reactors. They have been written off in a last-ditch effort to prevent an even greater disaster.'

and some bad:
'By Monday morning Japan time it was being reported that a total of six reactors along Japan’s northeast Pacific coast were experiencing breakdowns in their cooling systems, with technicians forced to declare states of emergency or use emergency backups. Another six nuclear reactors have been shut down as a precautionary measure while they are inspected for earthquake damage.'
http://www.wsws.org/arti...1/mar2011/pers-m14.shtml

'The nuclear power industry in Japan, as throughout the world, is conducted on the basis of private profit, giving the corporate owners, suppliers and operators a continuing incentive to cut corners on safety in order to fatten their bottom line—especially since special government waivers free the industry of financial liability in the event of a catastrophe.

The Fukushima reactor is based on a 40-year-old design by General Electric, now much less than state-of-the art. This outmoded design is replicated at a half dozen other nuclear facilities in Japan and at least 21 in the United States, including the Toms River, New Jersey power reactor, 55 miles east of Philadelphia and 90 miles south of Manhattan.

did u know:
'Hamaoka plant, just 100 miles southwest of Tokyo, which perches on an active fault line'

another disaster waiting to happen. Who are the corporate/scientific lion tamers who thought: lets perch our nuke reactor on an active fault line?

Sad, but Kudlow's elevating economics above humanity is but a reflection of the vice-into-virtue philosophy of the billionaire class.

At present, the nuclear disaster scale goes from 1-7.

From the LAT link

Like all U.S. and Japanese nuclear plants, they're built to withstand the largest earthquake considered likely in their regions, based on fault analyses.

They are not designed to withstand a man-made disruption which can exceed naturally occurring limits.

HAARP technology has demonstrated its ability to cause disruptions of great magnitude. There is also evidence (see Kudlow) that individuals can posess the insane cruelty needed to unleash a weapon like HAARP to cause unimaginable suffering on others.

The only question left is, would anyone actually do it?

FDL reporting another fire and explosion at #4...

... AP quoted as saying that TEP indicates that the first fire at #4 was never actually extinguished.

David Rockefeller has stated his wishes throughout his lifetime (Eugenics, Communism, etc). I have no reason not to assume that all of the unrest and upheaval we are seeing was on his bucket list, and at his advancing age, are being expedited to please him and his City Of London and Rothschild co-conspirators. The only way to get the people to beg for a new "order" is to cause untold disorder. I simply choose not to attribute anything to coincidence.

Big Dan has documented the potential of HAARP's role extensively:

From my perspective, Karl Rove is the Architect - the key strategist for the GHW/Rockefeller conspiracy - and has been calling the tune for a decade:

I'm inclined to believe the opposite of whatever the "news" says, and I'm proven correct more often than not. 150,000 people marched on the capitol in Wisconsin, and according to the news coverage it received - it never happened. An earth quake and tsunami prevented its coverage.

“The steel wall of the pool seems to show damage. All the surrounding equipment, including the two cranes, has been destroyed. There is smoke coming from reactor No. 3, and steam coming from the spent fuel pool next to it. That indicates that the water in the pool is boiling. And that means the spent fuel rods are getting hot and could start burning.”

If the spent rods start to burn, huge amounts of radioactive material would be released into the atmosphere and would disperse across the Northern Hemisphere.

Unlike the reactors, spent fuel pools are not—repeat not—housed in any sort of hardened or sealed containment structures. Rather, the fuel rods are packed tightly together in pools of water that are often several stories above ground.

“With damaged [fuel rod] pools, we are talking about things that were never considered a credible threat,” said Alvarez.

Aileen Mioko Smith, director of Green Action Kyoto, met Fukushima plant and government officials in August 2010. “At the plant they seemed to dismiss our concerns about spent fuel pools,” said Mioko Smith. “At the prefecture, they were very worried but had no plan for how to deal with it.”