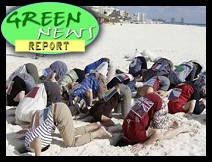 They want the country's largest and most untamed refuge to join the likes of the Statue of Liberty in New York, the Giant Sequoia groves of California, the Sonoran Desert in Arizona and George Washington's birthplace in Virginia.

National monument status could put an estimated 11 billion barrels of recoverable oil beyond the grasp of oil companies forever.