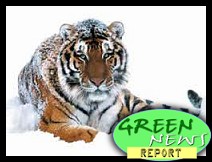 IN TODAY'S RADIO REPORT: 29 coal miners still trapped in NZ; Summit to save the wild tiger; Inching forward in the UN international climate negotiations ...PLUS: Getting ready for Thanksgiving with relatives who are climate change skeptics? There's an app for that ... All that and more in today's Green News Report!

The Russian prime minister, Vladimir Putin, and the president of the World Bank, Robert Zoellick, were behind the four-day event, during which it is hoped that $350m (£220m) will be secured for tiger conservation.

The forum – which is taking place during the international year of biodiversity and the Chinese year of the tiger – will also include the unveiling of an international consortium to combat wildlife crime and pledges to tighten protection by the 13 countries where tigers live.

« PREVIOUS STORY "Guest Hosting 'Malloy Show' This Week"
» Go to The BRAD BLOG front page «
"Dear American Workers: You Are Not Needed (Or, Corporate Profits Highest Ever)" NEXT STORY »