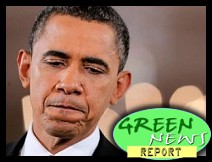 IN TODAY'S RADIO REPORT: Let the plutocracy begin! Republicans Rejoice: Victory in the midterm elections, re-shaping the House of Representatives, and re-writing the rules of "compromise," with consequences for clean energy and the planet; PLUS: To put it all into perspective: Another natural disaster bearing down on Haiti ... All that and more in today's Green News Report!

IN 'GREEN NEWS EXTRA' (see links below): Jan.-to-Oct. 2010 tied for hottest in satellite record; Pakistan's emergency rations to run out in 30 days; Halliburton may be shielded from liability in BP Oil Disaster; Can SCOTUS whale ruling be used to halt other projects?; U.S. solar-panel maker to close a factory; WA state nuclear plant scores low in reliability; RFK Jr: ‘A coup d’etat against the carbon cronies’ ...PLUS: The best U.S. cities for electric cars ...

A series of hurricanes in pre-quake 2008 Haiti killed 800 people.