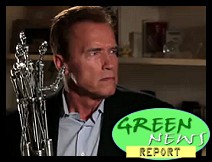 IN TODAY'S RADIO REPORT: Congrats ExxonMobil, ya did it again!; Have a greener Halloween; The Governator slams "wimps" in D.C., and his director James Cameron jumps in; PLUS: It's Crazy Time in the final stretch before Tuesday's pivotal elections, and the fists, dollars and puns are flying ... All that and more in today's Green News Report!

We need to go to Washington and say, "Look what happened. You, because oil companies have spent money against you, they have threatened you, you backed off the energy policy and the environmental policy in Washington." What wimps. No guts. I mean, here, you idolize and always celebrate the great warriors, our soldiers, our men and women who go to Iraq and Afghanistan, and they're risking their lives to defend this country, and you're not even willing to stand up against the oil companies? I say, "That's disgusting." You promised the people you'd represent them. You didn't promise the people you'd represent the oil companies and the special interests."