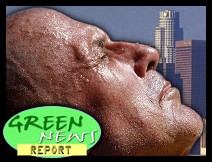 IN TODAY'S RADIO REPORT: SoCal is sooo hot - all-time record heat in L.A. this week, leads us to a Fox "News" February flashback; "Hockey Stick" graph vindicated - again; Half a billion corporate dollars to kill clean energy legislation ... PLUS: DOJ gives a pass to BP ... All that and more in today's Green News Report!

Six of the seven companies with the largest lobbying expenditures are Big Oil companies-ExxonMobil (1), ConocoPhillips (2), Chevron (3), BP (5), Koch Industries (6), and Shell (7). Their 18-month lobbying expenditures total $143 million. Their agenda varies among companies, but generally they oppose most proposals to reduce global warming pollution from oil refineries and transportation fuels. And they seek to limit companies' liability for oil spills like the BP oil disaster.