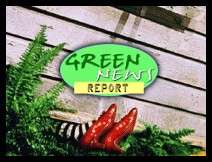 IN TODAY'S RADIO REPORT: Ding dong the BP well is DEAD, but the disaster lives on; Jimmy Carter was right; Solar panels on the White House?; PLUS: Get ready for Frankenfish!!! ... All that and more in today's Green News Report!

They explained that there were various reasons that the White House roof was not available for a gesture with very little energy-saving potential and that the Obama administration was doing more to promote renewable energy and reduce greenhouse gas emissions than any previous government. The word “stunt” may have come up.