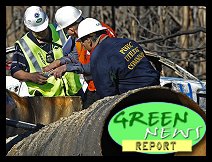 Mind you, I am not fond of the idea that Americans use 60 pounds of corn sweeteners per capita per year and another 60 pounds of table sugar, and I am not particularly eager to help the Corn Refiners sell more of their stuff.
...
This move is driven not only by bad press, but also by the fact that the price differential has all but disappeared. HFCS started out at one-third the cost of table sugar. Growing corn to make alcohol changed all that.

On the sugar issue: cutting sugar in general out of one's diet goes a long way towards weight loss. I have recently become much more conscientious about my sugar intake and reading labels on food. Unfortunately it is in almost everything, so it takes diligence, but I lost about a pound a day over the first ten days of doing so...no extra exercise or anything. I've read that the amount of sugar we consume today far surpasses thanof even 100 years ago and from an evolutionary standpoint our bodies simply have difficulty processing it.

Anyway, as a dietary habit its the best decision I have made, better even than going veg. I wonder what the comparitive environmental impact is.