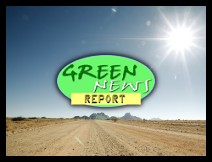 IN TODAY'S RADIO REPORT: Record summer heat around the world (where are the climate change deniers?); Is air conditioning making America fat(ter)?... PLUS: BP says relief wells will be ready, just in time for their quarterly earnings report ... All that and more in today's Green News Report!