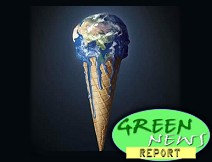 IN TODAY'S RADIO REPORT: A solar boost from Obama; Tarballs in Texas; And a blimp to the rescue... PLUS: Record heat hits Northeast and climate scientists exonerated --- AGAIN --- but climate change deniers still report it this way [cue: crickets] ... All that and more in today's Green News Report!

The movie 'FUEL' (freely viewed at www.hulu.com) points out that CO2 from coal fired power plants and from wastewater treatment facilities can be captured and utilized by algae that can be turned into clean burning biofuels.

A good temporary solution to the deadly environmental externalities foisted onto the public.

The reason they actually might add algae ponds near these waste sources is that they can charge a per gallon cost to biofuel consumers to recoup costs.

After the Muir Russell report was released, the Competitive Enterprise Institute (CEI) issued a statement charging: “[The report] gives every appearance of addressing all the allegations that have been made.... However, the committee relied almost entirely on the testimony of those implicated in the scandal or those who have a vested interest in defending the establishment view of global warming. The critics of the CRU with the most expertise were not interviewed. It is easy to find for the accused if no prosecution witnesses are allowed to take the stand.”

Bureaucracies produce notoriously bad science. When money and power are awarded based upon finding “facts” that fit a political agenda, then scientific objectivity gives way to that political agenda. That is why only a lifelong bureaucrat like Russell could be trusted to conduct the investigation of the Climate Research Institute. As the CEI put it, the Russell report is “a classic example of the establishment circling its wagons to defend itself.”