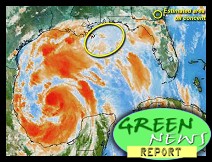 TWITTER: @GreenNewsReport
VIA SMART PHONE: Stitcher Radio!
IN TODAY'S RADIO REPORT: Hurricane season in the Gulf begins with a BP bang; Saving the BP baby turtles ... PLUS: Impeaching the BP judge? ... All that and more in today's Green News Report!

« PREVIOUS STORY "Associated Press Sees No, Hears No, Speaks No E-Voting System Fraud Nor Failure"
» Go to The BRAD BLOG front page «
"Of Burgers, Ballots, and Bogus Polls" NEXT STORY »