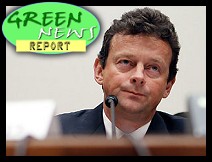 Welcome aboard to our latest new affiliate partner: The Nicole Sandler Show!

IN TODAY'S RADIO REPORT: Accountability, Big Oil, Small People, Shakedowns, $20 Billion, Hayward in the Congressional hot seat ... PLUS: The Fake President ... All that and more in today's Green News Report!

IN 'GREEN NEWS EXTRA' (see links below): Tea Party Star Rand Paul on Mountaintop Mining: Nobody Will Miss a Hill or Two; Corps suspends streamlined mining permits; GSA announces first “Chief Greening Officer”; Video-conferencing can save $19 Billion: Study; The link between global warming and extreme deluges; More oil spilled in Nigeria "every year than has been lost in the Gulf of Mexico"; China mulls crackdown on big energy consumers ...PLUS: Global Heat Is On in 2010, So Far ...

Why is it that Obama just can't do all the things he talks about doing. His speach was great. Now we need the action to follow it up.