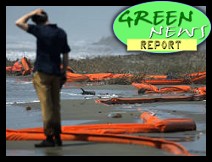 IN TODAY'S RADIO REPORT: Another string of deadly tornadoes hits the Plains; Another deadly coal mine explosion; Another toxic toy recall ... PLUS: The Blame Game begins on Capitol Hill as oil industry executives blame each other, and BP runs out of ideas ... All that and more in today's Green News Report!

Genetically Modified Foods: More Reason to Avoid Them; Why They Threaten Organic Agriculture