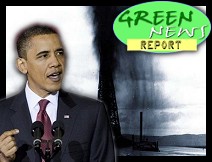 IN TODAY'S RADIO REPORT: Another record storm for the Northeast; Another climate scientist exonerated and another phony "ClimateGate"... PLUS: It's no April Fool's: Obama opens up offshore drilling ... All that and more in today's Green News Report!

DES- once again you missed the most important environmental news! Methinks that is why AGW has become a media darling- bait and switch. SEE BELOW_ Further evil in the Name Of Monsanto. I'm shocked (seriously) that this is mainstream news. Of course, not in the USA, natch.

It’s horribly disappointing. Rather than instituting a fundamental change of the failed energy policies of the Bush-Cheney era, what we saw yesterday is Obama essentially embracing wholeheartedly the policy of—that we can really drill our way to energy independence, that we can drill our way out of the climate crisis, and that somehow it’s OK to permanently sacrifice some of the most sensitive, some of the most ecologically important areas of our nation just for short-term political gain.

ARTIC SEA ICE about to hit normal. AGW is a fraud, like everything else about mainstream media and mainstream politics. SEE:

Cauldron, thanks for the link but we covered that study awhile ago.

Simply asserting that anthropogenic global warming (AGW) "is a fraud" is unconvincing. I'll remind you that every major scientific organization in the world --- you know, respected scientific bodies with members who are actual scientists in Earth systems disciplines, not journalists or bloggers or hobbyists --- agrees that not only is the earth unequivocally warming, but that multiple lines of empirical evidence from actual field data all point to the same conclusion: that human activities are the driving force behind that warming.

If measurements of Arctic sea ice indicate a trend back to "normal" levels, it would be good news. But that would not have any effect on the multiple lines of evidence across other Earth systems disciplines.

All excellent points, DES, but I suspect that they will fall on deaf ears of the global warming deniers who are really not into science.

Here is a link, once again to real scientists- by the way, aren't YOU a blogger?
http://cryptogon.com/?p=481
Timothy Ball, a former climatology professor at the University of Winnipeg in Canada, has received five deaths threats by email since raising concerns about the degree to which man was affecting climate change.
One of the emails warned that, if he continued to speak out, he would not live to see further global warming.
“Western governments have pumped billions of dollars into careers and institutes and they feel threatened,” said the professor.

INCREDIBLE- CO2 to be declared a poison while geneticists randomly manipulate the gene pool and call it food and gasoline.
INSANE!

Ernie @ #5, of course it will fall on deaf ears. That's the denier M.O. --- deny or outright ignore the scientific data, and if that doesn't work, deflect to a new "INSANE" argument. This is for readers who, unlike Cauldron apparently, genuinely desire to further their understanding of the scientific data and the gaps in that data.

Cauldron @ #6, it's hard to tell if you're actually obtuse or just intellectually dishonest.

The sources on this blog are based on scientific evidence from Earth systems scientists who are recognized experts in their fields publishing data in peer-reviewed journals, not TV meteorologists who have been repeatedly and embarrassingly debunked by actual climate scientists.

Corruption is a serious charge. If you have any proof of actual corruption, rather than the accusations and allegations that have all thus far been proven demonstrably false, then take your evidence to the world's scientific organizations. Surely you're not suggesting EVERY major scientific organization in the entire world is corrupt? There is a lot of money to be made for deniers of climate change science, so it's a wonder the scientists you say are corrupt aren't making more money at it by denying the evidence.

As to your "questions" and BS assertions, you clearly haven't bothered to actually inform yourself on the scientific evidence, and instead prefer to front the same tired, debunked zombie denier arguments.

AGAIN, please go to SkepticalScience.com, where all your "questions" and ALL of the BS denier arguments are listed and addressed patiently, carefully, and with full scientific data sourcing.

For an excellent overview of scientific literacy, climate science, and why it is so crucially important to understand the basics of climate science, check out "Climate Literacy- The Essential Principles of Climate Sciences".

Also, this ain't no April Fool's:

Grapha from the Energy Information Administration's estimates of global oil production:
The graph that may have made Obama say ‘HOLY S**T!’

DES- surely you are the intellectually dishonest one as you have not answered any of my main points- medieval warming period, lack of temp. increases for 9 years, warming on mars...
Here is a petition signed by 30,000 scientist's rejecting AGW.
http://www.petitionproject.org/

You have been co-pted by the big government TAX up your wazoo folks. The planet has stopped warming. That's science.

I know you have real concern for the environment, and that concern has been hijacked. CO2 is not a poison. Pesticides are poison, and they are being de-regulated to an extreme degree, Regulate real poisons.

And yes, most scientists are in it for profit not truth.

And yes many have been silenced because they seek the truth. Is Monsanto good science? They are so corrupt they make the Vatican look good. But you seem to refuse to actually think for yourself and want so called experts to do your thinking. Do me a favor- answer those three questions- be strong- think for yourself.

Cauldron tripled-down on the jackassery @ 10 with:

Here is a petition signed by 30,000 scientist's rejecting AGW.

Are you really that gullible? And then have the temerity to come here and accuse us of same? Really? Are you unable to do in the minimum amount of fact-checking to learn that that petition has beenlong ago debunked as propaganda? That many of the names on that "petition" either don't actually exist, aren't scientists at all (unless car mechanic counts as scientist or climate expert), many have asked to have their names removed since they didn't actually sign it yet their names appear, and that just .1% of the signers have any actual background in Climatology???

Are you that gullible? I'm afraid the question answers itself, it seems.

You have been co-pted by the big government TAX up your wazoo folks. The planet has stopped warming. That's science.

yes, most scientists are in it for profit not truth.

Your evidence for that is what exactly? Sure, those scientists make out like bandits though! Whose not familiar with the high-roller life-styles of those unheard of, obscure, college-employed earth discipline scientists living on easy street and bringing in the big bucks! Glad the poverty stricken energy companies have been able to help us out those high-livin' Dr. Moneybags!

(Seriously, you're not just kidding with these posts, are you?!)

Is Monsanto good science? They are so corrupt they make the Vatican look good.

Who the hell is supporting Monsanto? Or pesticides? What the hell are you talking about? (FYI, we'll have a story soon on Monsanto's extraordinary corporate corruption, but that has little to do with the fact that you, to use your own ill-considered typing, have been co-opted and scammed by the Big Energy/Big Denialist industry.) Are you really that much of a chump? Or u just play one in anonymous blog comments?

Wrong again, Cauldron. Again you prove yourself to be the intellectually dishonest one, because I provided links with answers to all of your "questions".

But since you're unwilling to take the three seconds to educate yourself, I will waste a few minutes today to do your research for you:

1. "If the earth isn't even warming anymore, then how is it warming? Hansen admits that there has been no warming for 9 years."
FALSE. From Jan. 2010: New Hansen Analysis and Global Temperature Data Counter Disinformers Who Say the Planet Is Cooling


Plus, the decade from 2000-2009 was the hottest on record:
- World Meteorological Organization: 2000–2009, THE WARMEST DECADE
- NASA Research Finds Last Decade was Warmest on Record, 2009 One of Warmest Years
- NOAA State of the Climate Global Analysis

2. "If Mars was warming while the earth was warming, doesn't that cast doubt on AGW?"
NO. See: Global warming on Mars, ice caps melting

3. If the medieval warm period was much warmer than todays climate, doesn't that cast doubt on AGW?
NO. See: How Does the Medieval Warm Period compare to current global temperatures?


5. "CO2 is not a poison".
Nice straw man argument ya got there. Nobody ever said it was.

Why would anyone waste their time posting debunked disinformation cloaked as "reasonable doubt on AGW"? Again, EVERY MAJOR SCIENTIFIC ORGANIZATION IN THE WORLD agrees that the globe is warming and that human activities are the most likely cause. Yet all scientists who disagree with you are apparently 'corrupt' and only in it for the money.

Looks like you've been "co-opted" by the billionaires in the fossil fuel industry (who according to you are somehow NOT in it for the money) who have poured millions into the climate change denial industry: Koch Industries funds climate change deniers, Greenpeace reports.

AGAIN, I heartily recommend that you take a few minutes to pre-bunk yourself at SkepticalScience.com to save time. They have already compiled all the answers to your questions with actual scientific evidence.

Some thoughts on Cauldron and his/her link to the Oregon petition.

“A lie can travel halfway around the world while the truth is still putting on its shoes.” - Mark Twain

The second is that after Brad and DES thoroughly debunked Cauldron's reference to the fraudulent propaganda behind that particular piece of global warming denial, Cauldron responded with silence. Either Cauldron is a provocateur who gets off on dropping BS onto DES's extraordinarily well-assembled, weekly Green News Report, or he/she is an extraordinarily reckless/careless individual who drops in BS then fails to return to read the responses that make him/her look like a fool.

If you had an ounce of integrity, Cauldron, you would acknowledge the error you have made.