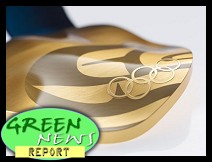 IN TODAY'S RADIO REPORT: Green medals at the Vancouver Olympics; Early spring in Japan; Slow boats to China; EPA under fire ... PLUS: Climate change legislation --- not dead yet! ... All that and more in today's Green News Report!