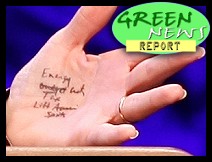 IN TODAY'S AUDIO REPORT: 'Snowpocalypse' in Washington, D.C., but snow-less in Vancouver for the Winter Olympics; Toyota recalls some Priuses (Prius's? Priusi?); The Green Police hit the SuperBowl! ... PLUS: Sarah Palin speaks Nookyular Tea Party-eese ... All that and more in today's Green News Report!

Um, I believe that would be Priuses. If you go the Latin route it would have to be Prii, which feels a bit awkward

Brad, where are you getting that information about the last decade "being the warmest in recorded history"? Hadley CRU? That claim is completely false and is refuted by the medieval warm period.
When you look at the long range temperature graph taken from ice core samples rather than tree ring data like Hadley CRU used, you see that the climate is well within range and no where near "record temperatures".

>"where are you getting that information about the last decade "being the warmest in recorded history"?"

The determination of the 2000s being the hottest decade in the instrument record come from NASA, NOAA and the World Meteorological Organization, working from three separate, independent datasets. The WMO uses the Hadley/CRU dataset, but NASA and NOAA do not. This explains some of the differences. You are mistaken in your assertion that the Hadley/CRU dataset is solely based on tree ring data.

If you believe that NASA, NOAA, and the WMO are mistaken or lying, by all means share your superior data with them.

And, for the record, WMO does rely solely on the Hadley/CRU data:

The Medieval Warming Period was not global but regionally present in the Northern Hemisphere, and therefore does not refute anything. Here's an easy-to-grasp explanation of the data.

There is no actual, verifiable evidence that any of the data from Hadley/CRU was falsified, manipulated or otherwise found to be "completely false and refuted by the medieval warm period", as you claim, in spite of monumental efforts of the climate change denial industry to paint it as such. If you believe you have seen evidence of scientific misconduct, by all means present your evidence to the panels currently in the process of investigating the hacked emails from the CRU.

The "hockey stick" graph was essentially vindicated in a thorough examination by a panel of the National Academy of Sciences (see the NAS report and here). If you believe you are in possession of superior data, you should present it to the National Academies of Science so they can revise their findings.

The video below debunks the climate deniers industry's criticism of surface temperature stations in the U.S.

NOAA, like any good scientific research organization, listened to and directly addressed the criticisms of Anthony Watts, a former meteorologist who runs the "skeptic" website Watts Up With That, by running only the data from surface temperature stations that Watts said were not an issue. The results were the same as when running the data from all of the surface stations.

The process of decimating Watt's report is clearly explained in this installment of Peter Sinclair's excellent series, Climate Denier Crock of the Week (h/t Pharyngula):