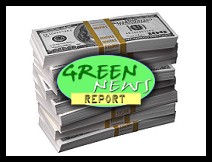 IN TODAY'S AUDIO REPORT: Scientists' Himalayan glaciers mistake is more fodder for climate change deniers; FDA aims at BPA --- but powerless to do anything about it ... PLUS: Climate legislation, Scott Brown, the GOP's 49-51 majority, the Supreme Court and LOTS and LOTS of corporate money... All that and more in today's Green News Report!

Got comments, tips, love letters, hate mail, billions in corporate campaign cash? Drop us a line at GreenNews@BradBlog.com or right here at the comments link below. All GNRs are always archived at GreenNews.BradBlog.com.

Were there death threats against Coakley or her family? NothingSo were is impossible these days, now that we are the "Corporate States of America!" We continue to prove we are the lesser beings on Earth as we destroy it. How will we survive if we continue our current ways with even more people populating the Earth that has less resources? Have you been able to invent something out of nothing? Where is my anti-gravity car?

Actually, glaciers have been melting since the last glacial maximum about 18,000 years ago.

When this reverses, then we'd really have something to worry about!