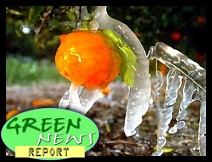 IN TODAY'S AUDIO REPORT: Baby it's cold outside! Record cold and storms in U.S. and Europe --- but the hottest decade on record Down Under; Water shortages in Mexico City and water contamination in China ... PLUS: A new tax for an old bag ... All that and more in today's Green News Report!

Don't know if you've seen this before Des, but;

Too late if this is already happening

Looks like preliminary research results show methane release from warming in the Arctic is already happening....we'd be lucky if the "preliminary" part of it proves to be wrong, because the potential consequences are, um, not good:

This undersea permafrost was until recently considered to be stable.

But now scientists think the release of such a powerful greenhouse gas may accelerate global warming.
...
A worst-case scenario is one where the feedback passes a tipping point and billions of tonnes of methane are released suddenly, as has occurred at least once in the Earth's past.

Such sudden releases have been linked to rapid increases in global temperatures and could have been a factor in the mass extinction of species.