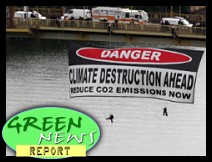 IN TODAY'S AUDIO REPORT: Will Obama end fossil fuel subsidies?; Will the Senate block Clean Air & climate protection... PLUS: The World talks climate change ... All that and more in today's Green News Report!

Sorry to be off-topic Brad. Do you think there could be a connection between the vote fraud that took place in Clay County Kentucky via those electronic voting machines and the death of part-time census worker Bill Sparkman? I suppose it could just be that they have a lot of bad people in that county.

And by vote fraud, I mean the fraud committed by election officials by intervening during the voting process of citizens and changing their votes before their electronic ballots were "cast."

TomR - I was likely working on the piece, now published, about that when you sent your comment originally.

Hey Brad,
Thanks for the heads up about the isolated population of Yellowstone Grizz (for over 75 years) suffering from genetic inbreeding being rightfully re-instated onto the Federal Endangered Species Protection list.

I spoke at the hearing in Bozeman against delisting prior to their removal but it fell on deaf ears along with all the other outstanding evidence and testomonies from other concerned citizens and world people as to why it shouldn't happen. The Bush administration and the US fish and game removed them anyway ignoring current studies and expert opinion about the numerous threats facing the bears such as diminished food sources, evidence of inaccurate total population #'s released by the Feds, and the fact the brown bears are not connected to other remaining populations. Creating a protected wild land reserve known as the Y2Y corridor (Yellowstone to Yukon) would connect them up through Canada.

The Canadian government is also doing their best to destroy the few remaining brown bear in their country with land developments, clear cutting forests, and stripping the land for energy uses.

Luckly, the US Federal court judge looked at the evidence and did the right thing by ensuring the bear's protection until their population can safely recover. States did not have plans or proper funding for such things as monitoring bears in place. Only plans to hunt them down.

Glad you caught it, GBD. Thought of you as we were doing it. Though thanks goes to Des for picking up the story for us!