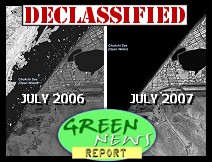 IN TODAY'S AUDIO REPORT: U.S.-China summit begins today in D.C.; Arctic ice photos finally declassified... PLUS: Chicken feathers! For both biodiesel and Republican Senators... All that and more in today's Green News Report!

IN 'GREEN NEWS EXTRA' (links below): Krugman: Is the threat of speculation a reason to shun cap and trade?; Tropical deforestation and its impact on global warming; Colorado Solar Customers Fuming Over Proposed Fee... PLUS: Could algae be the solution for biodiesel?...