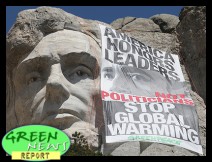 Got comments, tips, love letters, hate mail, evidence the world is only 6,000 years old? Drop us a line at GreenNews@BradBlog.com or right here at the comments link below. All GNRs are always archived at GreenNews.BradBlog.com.

IN 'GREEN NEWS EXTRA' (links below): Wind energy myths debunked by two new reports, while T. Boone Pickens drops plans for world's largest wind farm; Bad news for Arctic ice from NASA ... PLUS: 7 Surprising Sources of Indoor Air Pollution and How to Eliminate Them --- Do you know what's affecting your indoor air quality?

« PREVIOUS STORY "Toon of the Moment: GOP Governors Meeting..."
» Go to The BRAD BLOG front page «
"Palin '08: Clinton 'Does Herself a Disservice' by Whining About Media's 'Excess Criticism'" NEXT STORY »

The G8 arguments remind me of my early childhood spats with my brothers and sisters.... "I'm not gonna do it until Jeff and Jenny do it first!!!" The answer is we (and they) all must do the right thing to at least mitigate the coming drastic climate change.
In just a short time there will be no Arctic ice during the summer months.

Wind power generation is not quite as efficient as solar but is still an important part of the total renewable energy generation strategy. What I heard about THE T. Boone Pickens wind farm plan was that he was not just buying the wind rights on the turbine site but the water rights under it. WATER... Texas Gold... It'll make TBoone a Trillionaire !

Poor Indoor Air Quality stresses one's body to the point where those that are not strong enough or are weakened by an accident or intense chemical exposure can become seriously ill.
Make sure no matter how air tight your home is you have a source of tempered at need fresh filtered air. Simply opening windows and doors is not enough... especially during the extremes of winter and summer.

I like y'all's format now! Keep up the good work.

A recent Newsy.com video analyzed media coverage on the progress (or lack thereof) made on carbon emissions at the G8 summit. One cited international source, Xinhua News from China, had this to say about what it saw as a double standard: “While being vague about targets for themselves, the G8 leaders took a tougher position against emerging economies.”

Obviously, China, along with India and Brazil, is one of the strongest emerging economies in the world, and has much to lose from tougher carbon restrictions.

The report debunking wind intermittancy works well if you don't go outside and stick your finger up in the air.

Sounds like wind energy hired another expert. In an anti trust lawsuit brought against First Wind and Noble in NY ...they were both accused of hiring together an "expert" to say what they wanted them to...both paying them and then using the "scientific data".

The reason I mention First Wind is they built New England's largest wind farm in my community. I was struck by how dishonest and unscrupulous they were. As it turned out...many of Enron's employees went into wind energy. They haven't changed tactics over the years.

The "brain" behind First Wind is Larry Summers who is part owner of D E Shaw Group. (wikipedia)Larry is best known among environmentalists for dumping toxic wastes into third world countries. He doesn't think much of the brown people.

In 1995 Larry Summers was clinton's Under Sec of Treasury. Mexico was broke and wanted a loan. Congress would not pass it ..so Summers got it from a fund ...can't remember the name. Charged enormous interest rates. The Mexicans could not pay back their mortgages, home and farm loans. This started the mass migration of Mexicans into the US.

Alan Greenspan said in his memoir that he formed a lasting bond with Summers and Rubin over that. The loan was paid back early. But how much pain and suffering ensued? That is certainly not the concern of this little group. Great microcosm of the type of people in the wind industry.

"Make no little plans" for how then can you make enough money off the boondoggle?
The "big elephant in the room" is that the MSM is only speaking to big installations for power generation.

The answer to our energy needs is:
- first to reduce our perception of and the glutinous reality for electricity.... use only what you truly need.

- third... relying primarily on solar, wind, hydro and geothermal methods of electrical generation. The key to this is that it needs to be applied in a decentralized manner. Solar on every home and business, wind at the small farm scale, small hydro at falls and shelf drops as we did in the early 19th century, and geothermal for cooling buildings, not cities or larger.
Smaller scale applications is more secure and does not concentrate whatever negative impacts may occur.

Please visit my website where I am doing my best to document the ravages of climate chaos in New Jersey, where just about everyone is engaged in mass delusion that it's going to happen somewhere else, sometime in the distant future.

Recognizing the extent of damage to our ecosystem that is already evident is the first step towards addressing the problem. It is so important that this is brought to the attention of our legislators and policy makers in Washington. Only unified, global action will have the impact needed to avert disastrous positive feedbacks that are looming on the horizon.

Our forests becoming carbon emitters instead of sinks is a substantial tipping point, not to mention all the other deleterious consequences to wildlife.

You guys have to do better than just parrot every story special interest groups publish.

The blog of the podcast:
The Atomic Show #126 - Wasserman v Moore moderated by Goodman and Adams

The homepage of Patrick Moore:
Greenspirit

Konstantin, you still seem to be unclear on how it works here. The headline regarding the wind study is the headline at the site where it is covered.

We point to a wide variety of stories from around the web that we think our readers might find interesting. Again, that does not constitute 'endorsement' of any kind. If you disagree with the study or the story itself, take it up with that website where it originated.

You are welcome to post your own links here, like everyone else. Our readers are a sophisticated group and are perfectly capable of investigating and deciding for themselves from a multitude of sources.

Here is the thing...metaphor..The Mafia is kind to the elderly ..So you post a nice endorsement ..

This is not exactly what those of us who love the environment are looking for. Wind Energy throws a lot of money around for the so called endorsements.Because the facts just don't show any good that they do.

All of your comments here are focused solely on your opposition to wind energy. If you are looking for a site to help grind your particular axe, this is not it. But you are welcome to post your thoughts and supporting links, as long as you stay within our very basic commenting rules.

Because our readers are very smart & very discerning, we trust them to evaluate and draw their own conclusions.

Apparently you are also unclear on the nature of this site. Links do not constitute endorsement --- ever. We receive no compensation or consideration of any kind for doing GNR. Your assertion that "Wind Energy throws a lot of money around for the so called endorsements" does not apply to this site.