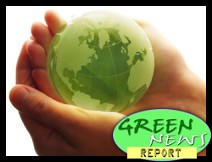 IN TODAY'S AUDIO REPORT: California wins one for a change; Where's the beef? Recalled!; Did EPA suppress study from global warming skeptic?... PLUS: Wingnuts lose it over cap-and-trade...All that and more in today's 'End of the World' Green News Report!

Got comments, tips, love letters, hate mail, E. coli burgers? Drop us a line at GreenNews@BradBlog.com or right here at the comments link below. All GNRs are always archived at GreenNews.BradBlog.com.

« PREVIOUS STORY "Jackson: Important; Bush, Endless War: Not So Much"
» Go to The BRAD BLOG front page «
"WSJ Whackos in Denial: 'Franken Stole It (and So Did Gregoire in '04!)'" NEXT STORY »

« PREVIOUS STORY "Jackson: Important; Bush, Endless War: Not So Much"
» Go to The BRAD BLOG front page «
"WSJ Whackos in Denial: 'Franken Stole It (and So Did Gregoire in '04!)'" NEXT STORY »
See MSVL and support BRAD BLOG! Click here for signed premium version!