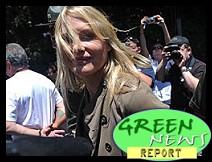 IN TODAY'S AUDIO REPORT: Darryl Hannah arrested (no, not for public intoxication!); Floor fight pending over climate change; Big Three automakers ignored their own consumer research ... PLUS: The Supreme Court kills a lake ... All that and more in today's Green News Report!

Got comments, tips, love letters, hate mail, toxic mine waste? Drop us a line at GreenNews@BradBlog.com or right here at the comments link below. All GNRs are always archived at GreenNews.BradBlog.com.

CORRECTION 6/26/09: In the above report, we misspoke in referring to the League of Conservation Voters as a "conservative" group --- the League is a conservation group dedicated to the protection of the environment. We regret the error.

IN 'GREEN NEWS EXTRA' (links below): UN suggests a global ban on plastic bags; Surprise! FEMA misspent millions intended for Katrina victims; 600 U.S. Neighborhoods Have Air That Could Cause Cancer; Sailing to the Great Pacific Garbage Patch...PLUS: Learning to live with climate change may not be enough...