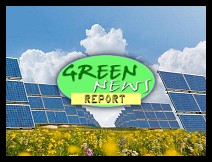 IN TODAY'S AUDIO REPORT: It's official, it's a pandemic! (Go ahead and panic); Obama doubles down on mountaintop removal; Green jobs bring in the green; PLUS: Hot shingles! ... All that and more in today's Green News Report!

IN 'GREEN NEWS EXTRA' (links below): "Food, Inc." opens Friday; Anti-oil protests turn deadly in Peru and extremely unpleasant in Ireland; "Bee Fences" in Africa; Wait, the U.S. is NOT 'the Saudi Arabia of coal?!?!'; Solar N' Salt, working together... PLUS: A Solar Explainer .... See below for more Green News!

Your links to this post in your ultra-deluxe major sidebar box are not working....

I know. Fixing. Thanks... (Had a hard drive crash yesterday, so been restoring, scrambling to get things back in shape)...