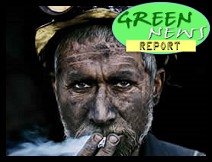 Got comments, tips, love letters, hate mail, dirty ring tones? Drop us a line at GreenNews@BradBlog.com or right here at the comments link below. All GNRs are always archived at GreenNews.BradBlog.com.

REIGN OF LOSERS. The New World Odor is clogging Obama's sense of smell on the issue of polar bears. He has obviously has been wearing Bush's soiled underwear on his head.