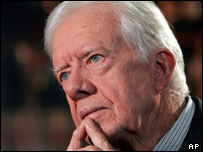 Earlier this week, the prime minister hit out at the "anti-American feeling" of some European politicians, describing it as "madness".

"The reality is that none of the problems that press in on us can be resolved or even contemplated without them [the United States]," he wrote in a pamphlet published by the Foreign Policy Centre.

Blair had more to say about the "madness" which seems to have infected a huge portion of Europe, and you can read more about it in this BBC report.

But Mr Carter told Newsnight: "I have been really disappointed in the apparent subservience of the British government's policies related to many of the serious mistakes that have been originated in Washington."

Mr Carter, an opponent of the US-led war in Iraq, added: "No matter what kind of radical or ill-advised policy was proposed from the White House, it seems to me that almost automatically the government of Great Britain would adopt the same policy without exerting its influence.

This was the case "in the Middle East peace process, in the case of the Lebanese/Israeli war in the recent past and certainly in the ill-advised abandonment of the war against terrorism to substitute the war in Iraq", he said.

Asked if he thought Britain was exerting its influence behind the scenes, Jimmy Carter replied he had seen no evidence of that.

"I haven't seen the corrective effect of British disagreement with what the White House has proposed. It may be there, it hasn't been evident to the public," he said.

It still makes me crazy that maybe the most genuinely-good man who has ever been president was beaten by the blithering idiot plutocrat puppet. Even at 81, he could do as much as anyone alive to undo the harm the * administration/congress/SCOTUS has done. Maybe he can inspire the EU to take the friggin' fiends out.

Reagan beat him because he CHEATED... he used the CIA (controlled by Bush) to worsen the Iran hostage crisis in exchange for supplying our enemies with arms, illegally! Bush probably had something to do with the OPEC oil crisis as well. Carter's administration was the height of personal liberty and governmental transparency & honesty during my 58 year lifetime. Carter went before Congress and said "It's not appropriate that the 'cure' does more damage than the disease. We need to legalize marijuana." Haven't seen honesty like that ever since...

Hell, he's 81 now but I'd STILL vote him another term TODAY if I could!

Yep. He is a truly great man. I once knew a Navy Seal who insisted that the hostage rescue SNAFU was someone on the mission not following protocol, and orders... insisted to me that the mission had been intentionally wrecked to subvert Carter. (And, Carter did, like a man, take responsibility for it.) I couldn't believe the Navy Seal at the time. But, in light of everything that has come down, pardon the awful pun, since, I believe it now! Jimmy Carter has more courage and decency in his little finger than any 50 of these creeps in control now.

The most rational man who ever lived!

This coming from most spine-less of men...American hostages in Iranian captivity for 444 days under Carter. As soon as Reagan comes to power, hostages released.
Robert Sawdey said "Bush probably had something to do with the OPEC oil crisis as well"
Ya.. and the crash of '29, the extinction of the dinosaurs..probably shot J.R. too

In 1980, President Carter was negotiating with the Iranians for the release of the hostages, and the negotiations seemed to be making progress, when a group of Republicans including led by George H. W. Bush intervened --- it is absolutely illegal for a private citizen to negotiate with a foreign government, BTW --- and made a deal with the Iranians: It was arms for hostages, nothing more, nothing less. Iran waited until Reagan was inaugurated and released the hostages immediately; then they sat back and watched the weapons roll in.

All this and much more has been amply documented. If you want to know more about it, here would be a good place to start.

Carter brought a dire message to America of what "staying the course" of being dependent on oil from the middle east would result in, and nobody wanted to listen.

He has been more then vindicated.

If I wasn't on a thread honoring his wisdom, I would have some much harsher words for you.

In my estimation, Mr Carter was our greatest president ever, period!!!

I don't know how much truth there is in this

story. I'm not sure, in all reality, that any other world leader would have been likely to walk out on the US president, once committed. Well not if they had any honour or political nous. That's just the way it is, folks. I believe Blair did try hard to get Bush to listen to Colin Powell regarding the aftermath of Iraq.

You can watch his valedictory speech to the party conference at my blog. It was universally agreed to have been an amazing speech even amongst the hardened journalists, given recent hostility from within his own party. Afterwards, it seems that many of them wondered what on earth they were up to!

But it seems that Tony Blair, who I think is by far the best Prime Minister we have had in our country for decades, is paying the price for Iraq and his backing of Bush.

I've set up a blog in support of Blair, as I'm sick of the Blair-hating usual suspects calling for his trial for "war crimes", and that's when they are being polite! I know some of you might agree with this call, and I know that your president gets this treatment too.

Well, it's a tough business. Still our PM must have a backbone, otherwise he would have crumbled recently with the number of knives slammed into his back.

Please visit my blog if you'd like to catch up with the machinations in the UK governing party at the moment. Leave a comment too, if you like.

My blog, Keep Tony Blair For PM, can be found at: