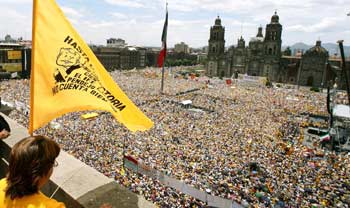 Throughout Mexico, the movement for social justice continues to take to the streets to press its demands.

Supporters of presidential candidate Andrés Manuel López Obrador took over tollbooths throughout Mexico City on Aug. 8, preventing federal officials from charging tolls on the highways into the city, and blockaded the agricultural ministry, preventing employees from entering. (Reuters)

The actions were in response to a court ruling that dismissed a full recount of ballots from the July 2 presidential election, in which what appears to be massive fraud led to the victory of the big-business candidate Felipe Calderón over López Obrador by a margin of less than one percentage point.

Protesters have occupied the Paseo de la Reforma, Mexico City’s main thoroughfare, for nearly five miles since July 30. The 47 encampments have stalled traffic along a street containing government offices, the U.S. Embassy and luxury downtown hotels, with business in the area claiming losses of millions of dollars. They have also blocked the entrance to Mexico’s stock market.

Only if YOU want it badly enough!

« PREVIOUS STORY "It's the 10th of August"
» Go to The BRAD BLOG front page «
"APN: McKinney Pursuing Legal Avenues to Challenge Elections in Georgia!" NEXT STORY »

Thanks WP. We could learn from these people. They are already at, where we are headed. Viva! Obrador!

Lort! Winter Patriot, I know somebody who's gonna blow when he clicks that link!

I'm so proud of our southern neighbors that I could just bust! I've been stumping for exactly this in Washington, D.C. for months and months and months, no, years. Actually, this has been the longest administration in my long life. Clinton was only President about a tenth this long. Viva Lopez-Obrador!

God bless them. This is true patriotism that our country can only dream of. We have too many people unwilling to risk even a little for the truth. Instead, most cower thinking 'oh well' it doesn't bother me that much, until of course it does. If we lose honest elections, we have lost all.

Couldn't sleep and had a thought listening to Mike Malloy. Does anyone know whether or not the Natl. Guard Troops that were deployed along the Mexican Border were federalized? Or was it a loan Gov to Gov? Surfed around and couldn't find anything on it, course I'm gettin kinda punchy.

This is how free people react when you steal democracy from then .Sad it never happens north of the border.What a different place the world would be !

Viva Mexico and those who want Mexico free of election corruption!

I believe the Govenors kept control. The boobengraber (Schwarzenegger) was pretty adamant in determining how many he would send and held the line when they wanted more.

I have been wanting the exact same thing to happen here since the clearly stolen election of 2000.

Problem here is that the Mainstream media is fully complicit in the cover up and most Americans are far to ignorant to think for themselves.

Hell 30% of Americans dont even know the year 9/11 happened.
About the same percentage actually think the Sun revolves around the Earth.

#5 MMIIXX,
I have a question:
What has the media in Mexico been reporting about all this? Have they been silent, like ours? Or have they been reporting steadily about the election & about these protests?
I don't read Spanish & don't know how to translate stuff, so my research is hampered.

Maybe, as you say, this is how free people react when you steal democracy from them;
or is this how people react to that theft when it's been reported about, so they KNOW about it? Is our lack of response ALL due to apathy? I suspect it's due also, maybe MOSTLY, to the fact that people DO NOT KNOW about all the election horror stories that we read about on Bradblog et al.
I think it's partly that we're too pampered & comfortable, & that there's always a certain amount of apathy; but I think enforced ignorance is a huge factor. Along with propaganda, of course.

"Democracy" has been fine so long as the Rich were electing themselves and appointing themselves. But, now that the rabble want to have their votes counted it's gotten all confusing and difficult. Maybe Mexico should follow the lead of America and just pretend to be a Democracy while practicing fascism. It's neater, cleaner and the trains run on time, right over the bodies of the poor folk.

Blockade the Stock Exchange. What a truly brilliant idea!!!

Organize, people. The NYSE would be a cinch to shut down with a million or so of us clogging the arteries of Manhattan. And as the money flows - or doesn't - so goes the world...

#9
Hi Joan - I know you were addressing #5, so I don't mean to horn in, but the Mexican paper our friends read is "La Jornada". You can find it online at www.jornada.unam.mx or just google "la jornada". The page won't translate well but you can make some of it out and there are pictures of the huge rallies. This is the paper people rely on for accurate political news and it doesn't pull it's punches. It's what we need here. There are other papers but my impression is that they are government mouthpieces. Maybe someone else can say more about this.

Some of the reporting from Oaxaca City has been overblown. We were there three weeks ago. Teachers were encamped in the zocolo or central square and people would take food to them. Groups of teachers and protesters gathered silently around small televisions set up under colored tarps and watched replays of the police attacks on protesters in June. There was graffitii, we saw one smashed window. But there were also lots of tourists who were treated with the usual Oaxacan courtesy. Articles make it sound like it was a war zone, it wasn't. People are angry with the governor and the government, not tourists. Tourism supports Oaxaca. A friend who returned several days ago said people were NOT routinely being stopped at checkpoints as one article described. A cab driver laughed when she questioned him about that and said it had happened briefly on one day, but not after that.

Things seem to be deteriorating however.

In recent days, violence has occurred courtesy of the corrupt governor, who, it is believed, sent gunmen to shoot up the student radio station. No one was hurt.

A group of women in Oaxaca, brandishing ladles, took over a radio station. They have renamed it " casserole radio".

Bradblog's news today from the BBC is the worst of all.

A major difference is that in Mexico, there are many poor people who have nothing to lose. They can't hide from reality like we do here, so they try to change it. Here, our vast middle class (which is most of us) has it's basic needs met. We can hide in our houses, turn on the ac, and pretend that Bush isn't destroying the country and the world. Maybe when Bush finishes with us, and we're out of gas, insurance, are bankrupt, our houses repossessed, sans medicines, our freedom a myth, and we finally get hungry, we'll turn out in the millions too. I hope that's not what it takes.

It does seem that about sixty percent of us are awake now, no doubt it could have been sooner if we had had a newspaper like La Jornada. I think most people are still counting on the elections in 2006 to change things. Of course, if the vote is stolen again that won't happen. Then we'll see how many people turn out when they realize the familiar avenue of democracy has been blocked off for good.

Seems to be a bit on the conservative side though.

Then there is the 'Narco News', which seems to carry a lot of stories of the "unverified" variety, as well as reprints from other sites.
http://www.narconews.com/

The folks in Mexico seem to take their democracy more seriously than we do.

Let's see...we're bogged down in Iraq, Israel invaded Lebanon, there's a revolution going on in Mexico...

Thank you, Bluebird! You didn't "horn in", your comment was most welcome. I will check out La Jornada. I really appreciate the info. I just got home & I'm ready to crash but will check out your link tomorrow, too.
Amor y paz to our Mexican brothers & sisters!

And thanks to them for turning on the light.

I saw that www.narconews.com is referenced here again, for which I am grateful..it is an excellent site.
I want people to go there, to read about what is happening in Oaxaca..it is taking a turn for the worse.

What is now happening is that the government is kidnapping ( they call it arresting) the leaders of the People's movement. It is fascism in action...police state stuff...and it needs to be known.
The protest in Oaxaca started as the annual teachers strike, but after being attacked by forces sent by the( illegally appointed, and the very worst in a long line of corruption) Governor, it coalesced into a widely supported movement to oust him. It was the final straw in many abuses he has been guilty of.
There is also widespread support for Lopez Obrador ( he won the state of Oaxaca), but this is more about the terrible abuses of the Governor, Ulises Ruiz.
There are many Americans who love Oaxaca,but they are not seeing the truth of what is happening.. the little you see on American news is the isolated graffiti ( I have seen the same ONE example everywhere saying " Anti-capitalistas" etc), but is is NOT an anti-tourist movement. or an anti-American movement...it is internal, and highly justified.
About Lopez Obrador...I SO respect him for what he is doing...there needs to be a FULL recount, or there will be no respect for the result. But Calderon and the powers that be DO NOT want it to be known that Lopez Obrador almost certainly won.

You know, there's a revolution going on there, and no one's covering it.

We all need to be a bit skeptical of any coverage out of Miami based media sources since many are heavily influenced/financed, by the Cuban exile community. "a bit on the conservative side" is probably being kind. As for narconews, many of their writers spend a lot of time "on the scene". I also wish they could "source" their work better, but that might be a bit difficult under current and past conditions, not to mention the MSM world orgs would just as soon ignore the situation.
#21 BigDan
"no ones been covering it".... for decades.