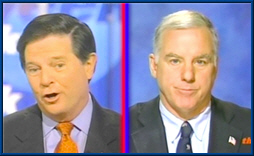 We posted this video from ABC's This Week at Crooks and Liars yesterday. If you are a fan of DNC Chairman Howard Dean then you'll enjoy this video. For those that get physically sick at the sight of DeLay, you might want to skip the first 5 minutes.

Most notable was DeLay's attack on John Conyers' concerns that President Bush may have committed impeachable offenses. The Republicans believe that they can motivate their party to get out to the polls in November to save their favorite President from certain doom if the Democrats take control.

Howard Dean largely ignores DeLay's bluster. Chairman Dean has really improved the focus and delivery of his message. Dean doesn't dodge the tough questions. He delivers clear answers, straight talk and real hope the the American people. Having DeLay and Dean on the same segment really exposes the great disparity in the quality of their character.

It goes to show how desperate the Repugs have become,... to have Thom Delay paraded out to
call the Demo's crooks and unethical,... was good
for a soil and wet yourself,.. moment of laughter.

Thom Delay,.. just climb back under the rock from
where you came,... you insect,... you bug,.. you
parasite.

As much as I deplore simplistic bullshit jingoism, this one...I kinda like.

Wow. This is from a Reuters report at Raw Story....

'BERLIN (Reuters) - U.S. President George W. Bush told a German newspaper his best moment in more than five years in office was catching a big perch in his own lake.

"You know, I've experienced many great moments and it's hard to name the best," Bush told weekly Bild am Sonntag when asked about his high point since becoming president in January 2001.

"I would say the best moment of all was when I caught a 7.5 pound (3.402 kilos) perch in my lake," he told the newspaper in an interview published on Sunday...'

Dean is doing a decent job of articulating Dem positions. Now, is he willing to help us wrassle control of elections away from the bad guys?
Come on Guvnuh, let's make elections free and fair...

Related to GOP corruption - We all heard about Goss "resigning" Friday (sounds like it was one of those, "You can't fire me, I quit!" moments)

Now Bush has tapped General Hayden to replace him. Y'all remember Hayden don't you? He's the former NSA guy who argued that the fourth amendment does not contain the phrase "probable cause". General Wiretap promises there will be no more leaks.

Now...anybody remember what I said this past Friday, about "I can't WAIT for this to tie into MZM? You know, the "defense and intelligence" company that, among other questionable practices, provided $145,000 worth of "furniture for the executive office"?

The frying pan is calling the tea kettle black.

you have had too much Koolade !!!!

I'm going to have an aneurysm,.. laughing.

Thanks to this administration,...

This is not a Democracy,...

it is a NCR cash register.

Let's run this (our) government,..

But only their buddies can play the game.

I was a reluctant admirer of Howard Dean. I am now growing to like his style. I feel confident that we Dems will take back the House and Senate now.
HEY! Doesn't that twept Gen Hayden remind anybody of an actor that used to appear on the original Star Trek series? Maybe it was "The Trouble With Tribbles," but the same actor also portrayed a lawyer who defended Mr. Spock. Anybody know who I mean?

when he put his hand on this bible,..

Can't get my post to work around the filter, so I'll shorten it and try one more time.

And if he did, I want to know WHERE he's fishing and what the hell he's using as BAIT!

Tom Delay knows what the American public wants and he hates it. They are rejecting the Hammer!

His good ole boy buddy bu$hit is down to 31% in conservative polls (link here).

When all sides of the argument are in agreement to what the polls show (link here), that Americans want democrats to take over the congress, and when those voter desires can be thwarted ... we have a republican dictatorship in place.

Tom Delay and Tom Feeney are two operatives of the republican dictatorship.

The definition of a dictatorship, in modern terms, is a situation where the people cannot change their government when they certainly want to.

The Tom Delays and the KKKarl Rovians say they are not worried:

"But Rove confidently tells the Times that he isn't worried about the troubles for the Bush Administration that a Democratic majority might bring."

"We won't see how that plays out because they're not going to win," Rove said (Raw Story link, bold added).

So how is this republican dictatorship going to thwart the will of the American public ... or are they?

Dredd - That's the million dollar question - and it could have several answers, none of them good for the American public.

Re: DeLay - I always feel like I need a shower after watching him...the minute he opens his mouth to speak, the man just OOZES slime.

"Approval down to 34%? Time to start another war"

"Approval down to 31%? Time to start another war"

Come on Brad, keep up with the times! (They are a changin')

WHY would anybody put DeLay on their show NOW? Nice as it is to see Howard smack Ferengis to the floor, the only cameras on DeLay should be the security cameras in JAIL.

Joan & Kestrel - Our Liar and Chief

The fish story is just the Liar in Chief showing the new Snow Job (a.k.a. press sexretary) how to perform.

Although if he was fishing in his own water, which probably glows in the dark from pollutants, there is no telling what one can "catch" in those "waters".

However, I do agree with you that the word "perch" should be changed, to accomodate the Whatever in Chief's needs, to "lofty perch".

We are all forgetting, also, that DeLay pulled the plug on his own father, then held sessions night and day to not pull the plug on Terri Shiavo. Remember that chestnut of hypocrisy??? How come no one brings up GOP hypocrisy like this?

So this fish was in Bush's private stocked lake, what else has he got in that lake to make the fish grow gigantic? And do you think he ate it? Is that how he poisoned his brain, eating his own irradiated/chemicalled lake stock.

#12:
Had to read the kr interview and am afraid 2006 and 2008 is the same song, different verse. Unless, they can be occupied with more important topics like jail, impeachment, treason.

If your license to practice medicine had been stolen, you'd want it back...right? Well, we want the 2004 election back.

Thanks, Bob Mills (an Independent voter).

Not 1 word about the environment. Not fcking 1 word but raising minimum wage is on top of the list. Delay's best new moneymaker. Make a punching bag with his face on it. Anyone with 1 oz of integrity without a history of public office could be a rep or senator and turn a republican shit pile into gold. Republidems stand for Loser fcking leadership. The American people cannot take anymore plastic corporate bushit. Plenty of loser "democrats." Did they forget about the rigged electronic voting issue central to Bradblog on this site which they have strategically avoided. so well. These political talk bullhorns say the word impeachment in a form of surprise? If Dem leadership gets their head out of their ass (that's funny), an amazing reality is what they would see. If they only told the truth they wouldn't have to rig the vote because victory would come like a sunami.

Another Republican drive-by debate. Just like that election official who told a bunch of lies while Brad was on hold and then sped off.

Howard could debate Delay one-on-one with his mouth taped shut!

Not only did Tom Delay pull the plug on his comatose father and then have the audacity to
interfere in the Terri Schiavo matter,..

That is only hypocrisy # 1

bu$$hco,.. Tom Delay and the right wing machine have put up a fuss about tort laws,.. negligence and
liability court actions,.. they have caused laws to be written to control the right of common folk to seek remedy for damages/injury in a court of law.

Tom Delay not only pulled the plug to end his comatose fathers life,... but Delay brought a product liability lawsuit against the maker of the tram the contributed to the accident that put his father in the comatose state. Bush has also used tort law to bring action to recover damages from
injuries caused to his daughters,.. by an accident.

Tort reform for you,.. but not for me : link

I'm proud of Howard. He is doing a great job. I think that the 50 state thing and fund raising "democracy bonds" ideas are really paying off. Liberals, moderates, and independents are energized for November. The best that crook Delay can come up with is to dust off gay marriage as a November issue. Ha!