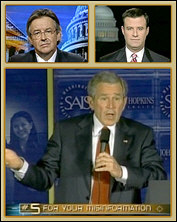 We should all stop calling uncensored/unsuppressed/unfiltered news "liberal". The Republican Noise Machine has all of us doing that.

We've seen this for years - nothing new here.

Doggone it, I was all set to watch Keith last night, but decided to curl up in bed and read instead. Wish I hadn't missed this!

Okay!
So now we've got at least (and at last) 1 MSM news outlet reporting the truth about Chimpy's lying to "justify" his immoral war of personal vendetta and greed in Iraq....

but will they ever connect the dots on the rigged elections the Repugnantcans used to illegally stay in power and further continue their criminality, war profiteering and mass murder?

Rawstory has a link up about MZM and their involvement in the "making tactical warfighting decisions and handling intelligence in the thick of the U.S. invasion and occupation"

This is the same company that had a $600,000 contract with the Executive Office of the President, including "furniture", back in 2002:

Hmmmm...sound like the Oval Office may have a bug problem? Where's Tom DeLay when you need him...

btw...whenever Bush hits the TV trail, he's in trouble and he's trying to get to the MSM with the first spin, which isn't the truth (as we can see).

.
.
.
Something strange happened in the WH Press Briefing on Monday. Nobody in the Press Room noticed.

I diaried about it HERE.

I believe Scotty may be hinting that there were TWO instances of declassification of the NIE documents and Cheney is one of the declassifiers.

Just speculation on my part, however.

Check out this Bush "truth" from the Whitehouse website.

Q Thank you, Mr. President. You have said that you are eager to find out whether somebody in the White House leaked the identity of an undercover CIA agent. Many experts in such investigations say you can find if there was a leaker in the White House within hours if you asked all staff members to sign affidavits denying involvement. Why not take that step?

THE PRESIDENT: Well, the best person to that, Dana, so that the --- or the best group of people to do that so that you believe the answer is the professionals at the Justice Department. And they're moving forward with the investigation. It's a criminal investigation. It is an important investigation. I'd like to know if somebody in my White House did leak sensitive information. As you know, I've been outspoken on leaks. And whether they happened in the White House, or happened in the administration, or happened on Capitol Hill, it is a --- they can be very damaging.

And so this investigation is ongoing and --- by professionals who do this for a living, and I hope they --- I'd like to know.

Great work! The fact that the info was KNOWN to be suspect and released by the Prez ANYWAY astounds me!

bush and his regime are pathetic

Given all the latest revelations, I am extremely curious to know what Bush and Cheney told Fitzgerald when they appeared together (and not under oath, remember) before his inquiry.

Think about it: if they lied, Fitzgerald can probably accuse them both of obstruction of justice (but not perjury, since they were not under oath).

And it's hard to believe they didn't lie, otherwise Fitzgerald would have been able to wind up his investigations a long time ago.

Fitzgerald knows. Let's see what his next move will be - it could be a big one! I think he should reveal the testimony they gave him, or call them back for another round of questioning, this time under oath.

I wonder if Resident Penis lover really knows half of whats going on at any time
From his answers it seems Cheney and Rove are pulling the strings, but I guess we already knew that
So many scandals

Also, Cannonfire has a good story on all the psy-ops fakery
Link here

Fitzgerald is going about this methodically, making sure all his ducks are in a row before he takes each step. He knows how important this is, and how to work a crime family from the bottom up - Libby is only the first. It's hard to be patient, I know, but once the trail to Bush and Cheney is clearly and undeniably established, it will all come tumbling down.

If the dominoes aren't lined up exactly right, they won't all fall when the first one is tipped. We need these guys not just impeached, but tried and convicted.

The good news is, this is making mainstream media on a nightly basis. We need to let the news outlets know that we appreciate it when they do their job, and that if they keep it up, we might actually start watching them again.

I have to admit, I'm still just DYING to see Jeff Gannon/James Guckert/Bulldog's name brought into this somehow. It's still amazing to me how that story completely slipped under the radar for most people.

Iran is flanked on both sides by US forces and we're supposed to believe that the first act of the Newly (installed) President is to call for the destruction of Israel while throwing in his denial of the Holocaust for good measure...and throwing out the nuclear inspectors? I mean really, this is ridiculous on its face, right?

And now, in order to dial it up a notch, he proclaims that they are successfully enriching uranium...appearing to stick his finger in the eye of the giant and daring him to attack. A warmonger's wet dream!

The planning to attack Iran was done during the planning to invade Iraq. Larry Franklin (convicted for passing secret information on Iran to Israel) ran the Iran desk inside the Office Of Special Plans.

What was to be the PRETEXT for this plan? What was the excuse they would require to implement their plan? How about the election of a new leader who threatens the world with nuclear development? Who helped him get elected?

Do you REALLY believe this guy's not working for us and Israel? Why would you?

For KBE: The Gannon story and the Cheney hunting incident story have a common thread...it's called the Secret Service.

The media might have avoided the story because it sounded too salacious, but the Secret Service violated its own guidelines for protection of the president. Somebody had to have given the order to relax those guidelines. That's where the media have been neglectful...not asking "Why?" loud and clear.

Likewise, the Secret Service blocked a sheriff's deputy from interviewing Cheney right after the hunting incident. They had no right to do this. Cheney wasn't in danger from a sheriff's deputy, who was exercising his responsibilities in an official capacity. The Secret Service's mandate is to protect public officials from harm, not to save them from embarrassment if they're too drunk to face a law enforcement officer.

The media have lost a lot of their investigative curiosity. That much is clear. But citizens have a right to know why Secret Servicemen, whose salaries are paid with taxpayer dollars, have failed to follow their own established procedures, clearly to save the White House from embarrassment.

This headline is funny..."Defies Corporate Media"...the truth is sometimes funny.