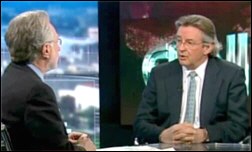 Wolf Blitzer interviewed former Ambassador Joe Wilson this afternoon during CNN's Situation Room. Joe Wilson and his wife, Valerie Plame Wilson, have been victims of a Bush Administration effort to stop the American people from learning that intelligence was twisted and misused to lead the country to war on Iraq.

Bush ordered that parts of the classified National Intelligence Estimate (NIE) be used to rebut a New York Times op-ed written by Joe Wilson. Wilson charged that the administration had had purposefully used baseless intelligence to inflate Iraq's nuclear ambitions.

Today, during a Q&A session with students, Bush said that he had released information from the NIE because he wanted people "to see the truth". In this interview, Joe Wilson sets the record straight by pointing out that the President only released part of the NIE to rebut Wilson's charge. If The President had wanted the people "to see the truth" then he would have also released other parts of the NIE which expressed serious doubts about the information Bush used to rebut Wilson's charge. In fact, by releasing more information which he knew to be faulty, George Bush just fed Americans another lie.

This video contains Wolf Blitzers' complete interview with Joe Wilson. It runs about 10 minutes. Wilson does a great job explaining some of the nuances of the case. He talks fast so you might want to watch it twice.

Blitzer is such an apologist. He never misses an opportunity to interrupt his "guest" with a defense of the Bush administration. Wilson is admirably patient with him and stays on topic.

OT...just part of the financial crisis just over the horizon, thanks to the Bush administration...just keeping you informed of news suppressed by the corporate-controlled MSM...

Something that has not caught on in the MSM, and in a lot of other places, is the possible reason, other than what is being talked about, that Plame was outed.

She was working on IraN in the WMD, or nuclear weapons, department.

And she knew that Iran did not have nuclear weaponry, nor could have, for probably a decade or more.

Hence, she had to be removed so that the republican dictatorship could foster its propaganda on us and prepare to invade or bomb Iran.

I highlight the "n" because I have noticed several MSM "journalists" doing freudian slips and calling Iraq Iran, and vice versa, lately on national public television !!!!

The psyops have worked and those fooled by it make no distinction between al Queida, Iran, Iraq, or other nations.

Thus, illegal immigrants look out, you are going to experience a back door draft. One of the conditions of your becoming a citizen will likely be service in the US Military.

Yep, the republican dictatorship wants YOU! To fight the oil wars.

What's one letter, after all?

I think Joe Wilson is a great speaker. There was a wonderful video of him from Colorado last year. I think it was last year. Wasn't it on this site?

He was awesome at the Q&A portion, anyway. And he did it again with Wolf.

How much longer do the American people have to accept excuses from this administration that a 12 year old couldn't get away with?

Something good might be happening though. NPR's Diane Rehm actually asked THE FORBIDDEN QUESTION after Joseph diGenova (the lawyer that, along with his wife Victoria Toensing, were sent here by God specifically to impeach Bill Clinton) attacked Joseph Wilson for having the audacity to publish the yellow cake article dubunking Bush. She asked if indeed Bush's leaking wasn't a more impeachable offense then what Clinton did.

Tonight Chris matthews was racing through the standard "impeachment is not even an option" line when he was stopped by Jay Leno reminding him of why Clinton was impeached. A very embarrassed Mathews, actually seemed to recant.

Impeachment is too slow. Frog march's, Wilson style, for all!