Jon Stewart reports on the current status of the Iraq invasion. 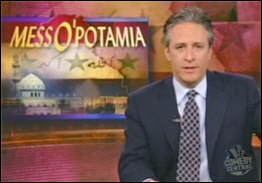 « PREVIOUS STORY "BREAKING: LEGAL ACTION TO BE FILED IN CALIFORNIA TO 'HALT USE OR PURCHASE OF DIEBOLD VOTING MACHINES' IN STATE!"
» Go to The BRAD BLOG front page «
"Hannity Gets Desperate..." NEXT STORY »

MESS O'POTAMIA. Wish I'd thought of that one.

I'm pretty sure my head would have exploded by now if it had not been for Jon Stewart.

Agent99 said...I'm pretty sure my head would have exploded by now if it had not been for Jon Stewart.
Amen to that. Watched bush's speech yesterday. Is it just me, or did his arrogant attitude and posturing make you just want to slap him?

Do you think this Iraqi woman could have done this 3 years ago? check out the link. Hay Jo.

can't get it to work so here the the transcript

Arab-American Psychologist Wafa Sultan: There Is No Clash of Civilizations but a Clash between the Mentality of the Middle Ages and That of the 21st Century

Following are excerpts from an interview with Arab-American psychologist Wafa Sultan. The interview was aired on Al-Jazeera TV on February 21, 2006

Host: I understand from your words that what is happening today is a clash between the culture of the West, and the backwardness and ignorance of the Muslims?

Wafa Sultan: Yes, that is what I mean.

Host: Who came up with the concept of a clash of civilizations? Was it not Samuel Huntington? It was not Bin Laden. I would like to discuss this issue, if you don't mind...

Wafa Sultan: The Muslims are the ones who began using this expression. The Muslims are the ones who began the clash of civilizations. The Prophet of Islam said: "I was ordered to fight the people until they believe in Allah and His Messenger." When the Muslims divided the people into Muslims and non-Muslims, and called to fight the others until they believe in what they themselves believe, they started this clash, and began this war. In order to start this war, they must reexamine their Islamic books and curricula, which are full of calls for takfir and fighting the infidels.

My colleague has said that he never offends other people's beliefs. What civilization on the face of this earth allows him to call other people by names that they did not choose for themselves? Once, he calls them Ahl Al-Dhimma, another time he calls them the "People of the Book," and yet another time he compares them to apes and pigs, or he calls the Christians "those who incur Allah's wrath." Who told you that they are "People of the Book"? They are not the People of the Book, they are people of many books. All the useful scientific books that you have today are theirs, the fruit of their free and creative thinking. What gives you the right to call them "those who incur Allah's wrath," or "those who have gone astray," and then come here and say that your religion commands you to refrain from offending the beliefs of others?

I am not a Christian, a Muslim, or a Jew. I am a secular human being. I do not believe in the supernatural, but I respect others' right to believe in it.

Dr. Ibrahim Al-Khouli: Are you a heretic?

Wafa Sultan: You can say whatever you like. I am a secular human being who does not believe in the supernatural...

Dr. Ibrahim Al-Khouli: If you are a heretic, there is no point in rebuking you, since you have blasphemed against Islam, the Prophet, and the Koran...

Wafa Sultan: These are personal matters that do not concern you.

Wafa Sultan: Brother, you can believe in stones, as long as you don't throw them at me. You are free to worship whoever you want, but other people's beliefs are not your concern, whether they believe that the Messiah is God, son of Mary, or that Satan is God, son of Mary. Let people have their beliefs.

What is going on here?

Those rightwingers on a drunkin rampage again?

Well, another snow job by bushie. I guess he wants us to overlook all the death (on both sides), destruction, and expense on the taxpayer! Normal people view war and death as something to use as a last resort and get it over quickly. Maybe if one of his loved ones was killed or maimed over there, he might sing a different tune, or maybe not!! He places dollars over lives.

When you start giving a damn about Muslim women in all countries (take Saudi Arabia for example) I'll be impressed.

Beyond that, my initial reaction to your question, "Do you think this Iraqi woman could have done this 3 years ago?" --- Is to ask you what scores of thousands of such women, men and children, along with thousands of American troops can do now...that they're dead.

When you stand up for civil and humanitarian rights everywhere, I'll be impressed. Until then, you're a propogandists on a political mission.

"Is it just me, or did his arrogant attitude and posturing make you just want to slap him?"

Anyone know how to get the celery chunks out of the speaker slots on my TV?

The above Jo is someone posting under my name. Here is a funny site. the Bush imitations are wonderful

Since someone else is posting under the name of Jo, I would be happy to change my handle to Joy. I have been Jo for a long time but there are WAY too many Jo's posting here. I

Sorry jo/joy. I just got home from work and checked in. I started posting under jo about a year ago, and when you started posting under the same name (a few months later) I stopped posting and just read. When you seemed to disappear for awhile I thought I would give it another try, and here you are! Don't know how 2 with the same name got accepted, but I guess all is well. Anyway, I think we're both on the same side of the issues. Thanks and take care...jo.

Sorry. Looks like you were here first. I took your name! Ok. From now on I'm Joy. I mostly read and only post from time to time when I think I have something worth saying.

Yeesh! I meant to put this site in comment 14. The Caliendo imitations of Bush are very funny.
http://politicalhumor.ab...ideos/v/caliendobush.htm

There you go again Bradley, First you don't want us to liberate the Iraqi women and then we must invade and liberate them in all the countries. One at a time and the rest will crumble. Like Wafa said it's 21st vs the 4th centry.

Who is the messy messiah that whispered in Bush's ear and told him to invade Iraq and bring messyanic demockcrazy to Mess O' potamia?

« PREVIOUS STORY "BREAKING: LEGAL ACTION TO BE FILED IN CALIFORNIA TO 'HALT USE OR PURCHASE OF DIEBOLD VOTING MACHINES' IN STATE!"
» Go to The BRAD BLOG front page «
"Hannity Gets Desperate..." NEXT STORY »
See MSVL and support BRAD BLOG! Click here for signed premium version!