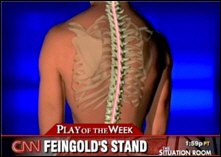 CNN's Senior Political Analyst Bill Schneider awards Senator Feingold the "Political Play of the Week" for his bold introduction of a resolution to censure President Bush.

Bill Schneider describes Feingold as "principled" while he suggests that other Democrats might need "Spines. Backbones. They help you stand up for what you believe."

Schneider says "Acting on principle need not be political suicide."

READER COMMENTS ON
"VIDEO - Feingold Gets CNN's 'Political Play of the Week'"
(18 Responses so far...)

I wonder how much more like sportscasting the news can get? No wonder so many Americans are down with slaughtering brown people. They're like footballs, baseballs, basketballs, golf clubs, chess men, video animations, CARTOON visual aides....

Get rid of all the current American government representatives....impeach ALL of them for NOT TAKING ACTION on behalf of the AMERICAN people. What is needed is another official party. An independant party that does not have an agenda like the republicans or the democrats. All of the current people are so corrupted. Put a limit on spending for elections so the average American can actually be a President. These rich-elite do not have the common sense that the real American people have (and are losing it also). These elections are bought and paid for by companies...which leaves America operating like a corporation rather than a nation. I mean really, who is that ignorant to vote another Bush in? If it is the religious voters or as they call themselves Conservatives, they are the nastiest of people. Can we count how many people have gave their lives in the name of religion? They are still living in an age (crusades) where they want to persecute anyone who is not a Christian and they are using the American government to kill anyone who isn't. Is that really a conservative measure.....NOT BY ANY MEANS.

First, he didn't choose "wiretapping of suspected terrorists" as an issue. He chose to highlight the ASSAULT ON OUR CONSTITUTION!
Second, to put it in terms of a "play of the week" cheapens the argument. It is a valid and CORRECT argument and the Constitution cannot defend itself. Even Reid, that spineless twit, says it was a motion borne out of priciple. Hey Senator Reid, where are your principles?

The polls are ever so slowly moving them to the center

Oh and by the way (comment 3) call the new party "Liberty" as a way of communicating the idea of democracy.

Well, he never called and said he was sorry to me!

I guess that means He’s NOT!

The only thing he is sorry for is that we caught him on tape.

“Voter Action” in New Mexico, documented that UNDERVOTES for President were as high as 37% in some Hispanic and Native American precincts using DREs.

Arizona is:
 Hardest and only state to have a recount law with the 1/10 of 1% rule finally when rule kick in it failed miserably (LD 20 under Arizona law NOT even a candidate for office can ask and pay for a recount.

On November 4th on CNN REPORTED that Arizona was one of the WORST STATES FOR VOTER TURNOUT, DOWN FROM THE 72% of the 2000 Presidential Election to 63% for 2004.

SOS Jan Brewer and Nathan Sproul were at a special Xmass party Dec 5th 2004 at the Whitehouse with W!

It took 20 days to find out that 384,639 ballots were not reported until Nov 22nd official canvas.

We found gold, in Feingold!

We've been saying it for years....our government is ALL on the take. They are forever worried about their success in the next election, and it certainly slows down any "call to action" that we, the public, might expect.

The talk show hosts have all been talking this point LONG before it finally happened. Now, everyone is shocked and stunned, and the spin-meisters are out there doing their thing to denounce his character, and make him look like the fool.

Hats off to Feingold. At least he shows he isn't a friggin' pawn in this game of life we all watch.

What more can we do for this true patriot besides write support letters to him? I want this on the front page everywhere. Maybe a gathering in front of the NY Times or Washington Post or Congress. We need something more. What public figure will stand up for our constitution and the citizens rights? Where the hell is Phil Donahue?!

Conyers In HuffPo On Feingold/NYTimes

I have to point out, though, HuffPo "STINKS ON ICE" for not reporting on vote fraud via electronic voting machines. They get the traffic to really broadcast it, too. So, in my opinion, they, like the MSM, are suppressing e-vote fraud stories. They are not stupid over there, they know it's going on and they are suppressing it.

Here's a big "YOU STINK" to HuffPo.

Thanks a lot, HuffPo, for helping suppress e-vote fraud stories. PHEEE-HEEEEWW! You stink for that!

We need to make SURE anyone that we're talking with who tries to spin this as "national security" KNOWS that's a LIE.. It makes me sick to see the Media (at the whoring of the right-wing) try to spin this as "Feingold doesn't want to tap terror suspects".. that's just such BULLSHIT!

Don't let these morons trick the sleeping masses AGAIN. Stay on point, that the PRESIDENT VIOLATED THE LAW, and the LAW ALLOWS FOR TAPPING TERROR SUSPECTS.. There is NO REASON for him to have violated the LAW if what he's saying is "true" (that this is about terrorism). The TRUTH is, the President is listening in on conversations OF INNOCENT AMERICANS in violation of the 4th Amendment, for no good reason! If they were "suspected terrorists", he can LEGALLY tap them.

gah! it's so damn simple that it hurts just trying to dumb it down enough for people to understand. /sigh

It IS simple. Amendments trump "inherent powers".
That's what amendment means. It clarifies the basic text. Why does no one make that argument?
There is no exception to the 4th Amendment for times of war. Where do they get that? Can the common man see better than the
so-called 'constitutional scholars'? They are so obsessed with the intellectual argument they bypass common sense. And the founding fathers never anticipated the NSA and their vast capabilities. If they had, they probably would have put something far more specific in the basic text to curb the power of the executive.

Clueless News network (cnn) is as bad as fox in that they stoke the gop neoCon Fear Champagne to the HILT.

Is the man with the Brass Balls (Russ Feingold) getting the neoCon gop Plantation owners worried?

The government needs a 100% overhaul.

Exactly. The Article II argument the regime advances and the republicans in congress parrot is unavailing for a source of "inherent authority".

As commander-in-chief he can only do what the military can do.

And pursuant to the posse comatatus laws(link here), that does not include any form of police work within the US boundaries. Wiretapping in the US is a police function.

And of course, the 4th Amendment is subsequent to Article I, II, and III, and is binding on all branches of government. No wiretaps may occur without a warrant. Warrants come from the judicial branch of government, so as to put a check and balance into the equation.

Additionally the FISA act is redundant in that it puts FISA as the only court to go to when warrants concerning foreign wiretaps are involved. That law is being broken, and the penalty includes jail time because it is a criminal law issue.

Feingold is correct on the merits, regardless of the issue of political tactics and methodology used to bring the merits up for consideration.

1000% with you Dredd. The question now is, who's going to stand up? I was watching a 2 hour C-Span panel on wartime powers of the president and not any mention of the point that amendments supercede the basic text which is why I wrote what I did. Where is there a common sense history professor with unassailable credentials? No one says that the Bill of Rights CANNOT be violated. They all point to instances of violations as their justification for doing it again. The slow whittleing away of our freedoms that will eventually deteriorate to a total dictatorship with the facade of a democracy, just like the Roman republic. Are we there already? I have to hold onto some hope that we aren't but boy, are they making it hard.