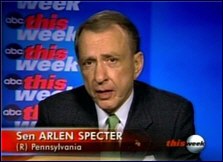 On the issue of warrent-less NSA Wiretaps authorized by the president, Stephanopoulus asked Specter what the possible remedies would be if the president's actions were found to be illegal. Specter replied, "...Impeachment is the remedy. After impeachment, you could have a criminal prosecution..."

I watched the program as usual and have posted about it on another thread here.

The path Specter set out is the constitutional path, however, there is no plan at all on the committee at the present time to consider it.

What will probably be heard during the hearings are all the legal theories for and against the president's actions.

The way the congress is reacting to the Abramoff affair shows how they will handle any matter.

They will do as little as possible and hope that works, more if it doesn't, ad nauseum.

What will be shown is that crime and corruption are so firmly embedded that the only remedy is going to be landslide elections.

Specter is a lawyer in politician's garb. He's merely stating the literal truth, that Bush can only be held accountable through the impeachment process first.

His remarks will be taken out of context, no doubt, and the inference will be drawn that Specter is recommending impeachment. If he really is, it's a devious and clever move, because he can always reply, "I'm just stating the Constitutional reality."

I don't think that Specter has any love for Bush, but he is loyal to his party. Does Specter want to reform his party and turn it into the party that it used to be (or used to claim to be anyway - small govt, fiscally responsible - I don't knowthat it ever really was that)? If so, now is his opportunity. Semi-sane people like Specter have got to realize that a thorough house cleaning is needed if there is going to be any hope of returning the Republicans to their former stature.

Dredd, if you read the statistics, Kerry won Pa. by 9% in the exit polls, but the (ahem, wink wink) "final count" was 3%. That is an underlying strategy to concede landslide BLUE states, but still pile up millions of "popular" votes. That's why the "popular" vote had an 8 million swing (Kerry won exit polls by 5 million popular, Bush won (ahem, wink wink) "final count" by 3 million = 8 million vote swing.

Dredd, look at all the stats exit vs. "final", all exit poll errors favored one party, the Republican party, adding thousands here, millions here, even in states that Bush lost. That's why college & university professors came out with that statement, that it's hundreds-of-millions-to-one, that ALL exit poll shifts randomly favored one party, the Republican party. That is no longer random, it's planned, when something like that happens.

I can't believe we live in the technological age of 2006, and all the stats are there, and the MSM is ignoring them. It's a definite MSM blackout, that's a fact.

The American MSM covered 24×7, the Ukraine exit polls being off from the "final count". But, not in America.

It is so obvious what's going on, and all the stats and facts are out there, it's sickening.

Well, hold on there.
Don't get too excited about Specter saying "...Impeachment is the remedy" until you listen to the whole clip. What he actually says, while laughing rather amusedly, it seemed to me...

In answer to another question on impeachment along the lines of Are you willing to take the investigation as far as it will go,
he says, amazingly, to my mind,
"...Haha, I sure am, but I don't see any talk about impeachment here..."

He says he doesn't believe the president had the authority to circumvent the law based on the resolution authorizing the use of force, but he may have it in certain "wartime circumstances"...

Implicit in every discussion I've seen or read about this is the assumption that the admin did this in response to 9/11, that being the act that catapulted us into "wartime". Well maybe Arlen should read this li'l bit of news:

But if he sees & hears no talk of impeachment in his rarified circles, chances are Truthout is invisible to him as well.
And anyway, according to old Arlen, the president is "making a good-faith effort" and doing what he believes needs to be done, so hey, no biggie!

Stephanopoulos also asked him if he would be willing to amend the law "to accomodate this program". His answer that he'll listen but he'll be skeptical rings kind of hollow given all the caveats in this interview.

And since when do we go back & change the damn law to accomodate a crime that's already been committed?! Pretty sweet! I think alot of folks in prison might be interested in that one!

Typical liberal attempt to mis lead its readers by carefully selecting phrases that seem to support their idiotic world view.

Its done all the time, and you people just suck it up.

ricky your doing a heck of a job.

as you can see in every comment before yours, people here actually read articles and watch video clips that are posted. I guess thats not how you do things in your corner of the blogosphere.

"It's better to be silent and have people think you're a fool, than to open your mouth and remove all doubt".

Michelle Malkin gives aid and comfort to the enemy.

BVAC #8
Thanks for the links, great stuff. Malkin is truly worthless, hateful, spiteful. Ann Coulter is only worse because she had a larger audience. Malkin's work (now exposed a plagiarism) is pure idiocy.

Ricky, honey, I know you're trying really hard to keep up with the conversation, but the issues we're discussing here are just too far above your level of understanding.

I'm sorry sweety, just hang in there and let us take care of it, we'll try again to explain it to you when it's over.

Kestrel #12... LOL! I love it. We nix the intellectual elitist crap and replace it with maternal clucks! I love it.

As I said originally, the hearings must be pushed to the wall on the basis of impeachment to get every republican and democrat to squirm.

Once they're squirming, and its found that the law was for certain broken they will carry out impeachment or be thrown out of office.

That's all there is to it. 70% of this congress is connected to the Abramoff scandal, its going to end very bad for them. They have to turn on themselves, or prepare to go down the hard way....

That includes impeaching, and also getting rid of Cheney for good.

The voting machine fiasco will explode before that happens, making the case of electro-magnetic sabatoge interesting.....but ultimately moot.

Hehe...but what does EMP do to Pacemakers? Umm...the ones in the voting machines, that is?

I'm not sure where you or Ricky or any of the others who are having trouble comprehending these issues are located, we might just have to get y'all on a video or teleconference to try and get you somewhere near on the same page as the rest of us. Don't worry, sugar, we've got it under control. We'll hold your hand and guide you through it once we've taken care of the problems.

Let us know your medication and nap schedule, and we'll do our best to make it at a time when you all are able to focus. It might be a good idea for you to write your questions down beforehand, so you don't get lost in the conversations.

Now just relax hon, and try not to worry - it won't be long now.

Seriously though, I've found that there are many parallels between working with small children with behavior problems, working with abused animals, and working with adults who adamantly refuse to face facts that contradict their beliefs - a condition explained in this article about Cognitive Dissonance by James Atherton:

* if someone is called upon to learn something which contradicts what they already think they know — particularly if they are committed to that prior knowledge — they are likely to resist the new learning. Even Carl Rogers recognised this. Accommodation is more difficult than Assimilation, in Piaget's terms.
* and—counter-intuitively, perhaps—if learning something has been difficult, uncomfortable, or even humiliating enough, people are less likely to concede that the content of what has been learned is useless, pointless or valueless. To do so would be to admit that one has been "had", or "conned".

What humans (and animals) have learned as a result of previous experiences is what they feel comfortable with - and they are distrustful of anything else. People tend to look for whatever works for them as far as self-protection and getting their own way, and that's the method they fall back on when they feel threatened.

We don't understand how they can be so blind, because we're seeing it on a different level. It's like they can stand there in pouring rain, with water soaking their clothes and filling their shoes, and still swear, and more importantly, still BELIEVE, that it's a clear, sunny day. Facts won't work, because they are not capable of dealing with facts that contradict their beliefs - they threaten their comfort zone. Until we can "gentle" them out of their protective little cocoons, they won't be able to face the reality that surrounds them.

The comments attacking the messenger instead of presenting valid points to contradict the message rise from their own fear and insecurity in their beliefs. If they really thought there was no validity to certain posts, they would be ignored. The closer something gets to the truth, the greater the fear, and the greater the attacks on those who are providing the information.

Sorry for the OT folks

We now return you to your regularly scheduled topic.

Lets play the match game: type your state reps names into your search engine add a +Abramoff and see what comes up lol. Cooperation is only a enter button away lol. The PNAC document should have been enough..but some are slow learners

How 'bout a big whopper of an electromagnetic pulse?

...I mean, to wreak havoc on the voting machines, of course!!!