Fresh from the holiday break, Stephen Colbert uses his classic sarcastic style to highlight the corruption scandal that has erupted around Republican lobbyist Jack Abramoff.

Stephen Colbert: "There is no story here." 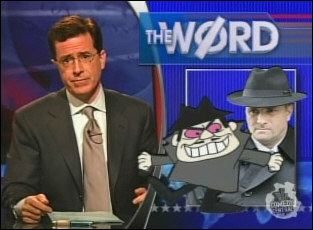 READER COMMENTS ON
"The Colbert Report Returns with Take on Abramoff Scandal"
(16 Responses so far...)

Does this mean Katherine Harris is Natasha?

Not a Story Either

This may appear on the back of your personal mail telling you it was opened by your government without your permission just to protect you (link here).

Will you believe it?

YAAAAAAWN. Wake me up when you decide to try to do something to straighten out this mess we call Government.

RawStory is just now breaking a story about a link between Bob Ney and "billing favors for Diebold."

Trolls, take notice. This guy is implicated in the Abramoff scandals. He worked on HAVA, and had the gall to show up at a Common Cause hearing five days after the 2004 election and proclaim that he was ready to do more horse-trading (my words) with Democrats on HAVA but that "neither side will get everything it wants." Meanwhile, he apparently had already made sure Diebold had gotten what it wanted. Also please note that Diebold is now the subject of at least two class-action suits alleging fraudulent statements in connection with its voting machines, going back to Oct. 22, 2003, and that its C.E.O. resigned under fire on the same day the suits were announced.

No, I guess you aren't. When you visit Ney in prison, give him my best, will you?

Stephen Colbert is a genius of comedy in general, and news parody in particular! Kudos are in order for all on "The Colbert Report" team.

Isn't that sad that we can sit and make fun of our current President doing cocaine and drinking on the job? Aren't there any mandatory pee tests? Didn't cocaine used to be illegal? Sure seems like there should be random tests, what with being behind the wheel of this country and all.

Colbert is okay, following Jon though...tough act to follow. Don't really like that Colbert never smiles or speaks warmly, but guess the bad ass seriousness is part of it. But hey! Anyone helping to get some news out is wonderful

OT - Was driving the other day and next to me at a stop light was a Diebold pick-up truck! No lie. I had to lol at the thought of them hopefully being banned. Sure hope we aren't forced to use those machines again in '06! I would really like my votes to be counted this time.

#2 Dredd - That is scary. They'll be placing cameras inside our houses soon, "for the security of the nation" - very scary.

Yep, Concerned Citizen (#7), that Colbert bad-assness is strictly in character, which is why his performance is brilliant on so many levels. Jon Stewart performs as himself, which is an easier thing to do, as he is well familiar with the character.

From an improv point of view, Colbert takes the form to new heights. If you've ever watched "Whose Line Is It, Anyway?", you've seen some mighty improvisation going on, but Colbert takes it even further.

He writes and performs entirely in character, and rarely flubs --- not as easy as it looks, even when working with teleprompter --- with subtly nuanced cadences, inflections, gestures, postures... everything that made his "Colbert" a fully realized character right out of the box.

and he does it every day, and writes it, too (in collaboration, of course; it would be much too much work for one person to write well and perform at such a high level of precision --- PLUS an off-the-cuff interview, improvised in character with a real person who is not trained in improv.

that's really, really, really hard to accomplish all at once, much less every day with a brutal, 24-hour news cycle from which to gather material to skewer.

there's an improv exercise called a "harold", a long-form improv. beginning with the suggestions of the audience, it is sustained much longer than the games you see on "Who's Line Is It, Anyway?".

Two performers weave a complex tale with multiple storylines and characters over 40+ minutes, or as long as it takes to bring the story back full circle to the original audience suggestions. It has to make sense, it must have a plot, and a beginning, midle and end (something SNL has trouble with) and the performers make it all up on the spot. It is very difficult to master, but fascinating to watch.

Colbert accomplishes a "harold"-like show every day --- with help, of course, and a tiny bit of rehearsal --- and maintains the precision without a net when interviewing "real" people.

so even if the character leaves you cold, look at the herculean effort and the levels of comedic artistry he brings to every show. not many people can do what he does, and do it so flawlessly and spot-on.

here's a link to the Wikipedia entry that offers further detail on The Harold and long-form improv.
http://en.wikipedia.org/...i/Improvisational_comedy
link

Another "No Story Here"

Two million Americans filed for bankruptcy in 2005 (link here). It is an all time record, a "catastrophic success".

Meanwhile Abramoff is taking millions and giving it to the rich criminals.

The presstitutes in the MSM think "No story", which is the big story.

Lol! Damn, Des, are you his press agent? (just a poke in the ribs)

Oh! Des...btw, o.t. but...
Do you by any chance know that very long joke about a brick, which goes into a second very long joke that ends up back at the brick??
Just sounds like you might know it if anybody would...

From Political humor:
"Lots of people are returning gifts this week, and that's just Congressmen. ... Even President Bush returned $6,000 given to him by that creepy Jack Abramoff guy. But Bush said he hadn't done anything with the money. In fact, it still had the original strings attached." --Jay Leno

Things are so bad now the Iraqis are offering to help us restore democracy in Washington." --Jay Leno

"President Bush met with all the former secretaries of State and Defense for advice on Iraq. This is quite a change. This is the first time Bush has listened to anybody. Well, if you don't count the wire taps." --Jay Leno

"According to the Washington Post, Vice President Dick Cheney is limping today because he injured his foot. Cheney said 'If you think my foot looks bad, you should see the old lady I was kicking.'" --Conan O'Brien

One thing I reflect on from time to time is that these staggering, astonishing, unbelievable, and criminal events that are shaking our ability to take it all in ... are only the tip of the ice berg. It is far, far worse under the hood.

Really, this is stuff coming out from the most secretive administration and congress anyone can recall.

With all the admin and congressional power and all the embeddedness of the MSM, the stench is still reeking out.

And that stench is so strong it makes one want to puke.

There was a short article in Time Magazine about Colbert. They mentioned that he is doing a take-off on Bill O'Reilly. When you look at it from that perspective, he's even funnier.