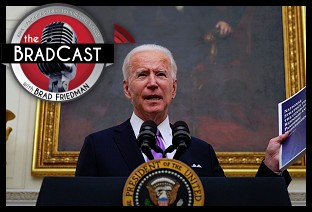 On today's BradCast: Now that the new Administration is actually inside the White House, the extent of the unspeakable mess left behind by the previous occupants are only just now beginning to come to light. [Audio link to show follows summary below.]

When it comes to the still-worsening COVID crisis --- just one of the several crises left for President Biden to clean up in the wake of the unprecedented failures of the Trump Administration --- apparently it's all much worse than feared. There was, reportedly, no coordinated effort in place at all to deal with national distribution of vaccines, nor to deal with the difficult task of safely reopening schools and businesses in hopes of reviving the still-worsening economic crisis that Trump and Congressional Republicans also left behind for the new Democratic Administration to clean up as well.

After yet another Democratic President is left to clean up yet another economic disaster following yet another Republican Administration, one might wonder why it is that Americans and many in the media continue to falsely suggest the GOP is the party of fiscal responsibility, when they are clearly the complete opposite. I've got a thought or two today on how that scam continues, year after year after year, despite actual facts to the contrary.

Among the many stories covered on today's program, as the "clean up on aisle 45" gets under way on the first full day of the new Biden Administration...

We had a(nother) server problem tonight which delayed posting tonight. But everything SHOULD be there now. So I'm not clear what you mean by "link not there"???

I had to download from this page to listen to today's show.

Same thing happened to me, Steven D. It's the second time. I'm subscribed on itunes, and I've periodically had issues with getting messed up files (the show would start over after some amount of time), but that had stopped. Now we're getting the wrong shows.

So sorry about that! It appears to have been an upload mistake on my end. The correct file is there now, but it sometimes takes a bit of time for it to show up at iTunes. Thanks for letting us know! Next time it happens, please do let me know asap - desi at brad blog dot com.

Say - Went to listen to your podcast last night at around 10pm Pacific Time and while the description was current, the show was from about 2 weeks ago. Looks like everything is okay now. The audio here seems to be the right one. Thanks, Desi for fixing it! It's so seldom anything goes wrong that you have us all spoiled.