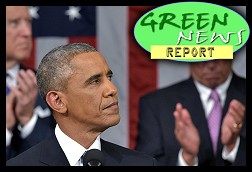 IN TODAY'S RADIO REPORT: President Obama's State of the Union focuses on climate change; Republicans' sneaky move to give the Keystone XL pipeline a new name; Yellowstone River pipeline spill spews oil and cancer-causing benzene; PLUS: Yes, Republicans vote climate change is not a hoax --- but there's a catch... All that and more in today's Green News Report!

Who was the one Senator who voted against acknowledging the reality of climate change?

NBC: "The lone no vote was from Sen. Roger Wicker of Mississippi."

They don't mention it, but you'll shocked to learn that Wicker is a Republican.

UK's Independent: "Meet the one (and only) US senator who still thinks climate change is a hoax"

They weaseled out of it by saying global warming is not a hoax, but they also said humans did not cause global warming, nor can we fix it.

The effect is that both parties are in the same "it is no biggie" boat in the sense of what to do about it.

Which has been the problem for a century, highlighted by the president's chest thumping "we'r number one" in crude oil extraction.

The bottom line is that the delusion of considering civilization threatening catastrophe to not be a big problem is still the psychological problem in need of therapy.

Good question, Ernie --- just added this to the post above.
Senator Roger Wicker explains his lone 'no' vote on climate amendment (Mashable)

... and a link to your excellent new piece on Keystone XL, eminent domain, and rightwing hypocrisy!

Qil-Qaeda, you can run but you can't hide:


"Mark my words, you plutocrats, denialists, fossil-fuel hacks and science charlatans – your time will come when you will be backed against the wall by the full wrath of billions who have suffered from your greed and stupidity, and I’ll be first in line to put you there"