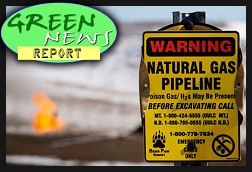 IN TODAY'S RADIO REPORT: Obama's big move to cut methane emissions - but there's a catch; West Virginia and the fight for science in science textbooks; Good news and bad news on sea level rise; PLUS: Car Wars - it's Tesla vs. Chevy in the race for electric cars... All that and more in today's Green News Report!

IN 'GREEN NEWS EXTRA' (see links below): WA Gov. Jay Inslee's big green plans for his state; Booming solar jobs aiding economic recovery; Sen. Sanders forcing Republicans to go on record on climate change; Not all Republicans think alike about global warming; Fracking pollutants found in PA rivers; CA limits pesticide use on strawberries; Rooftop solar already cheaper than utility rates in some cities; Pope Francis steps up rhetoric on human-caused climate change... PLUS: The Logic of Divestment: Why We Have to Kiss Off Big Carbon Now... and much, MUCH more! ...

Sing the methane song and dance to Eric Clapton's "Cocaine"