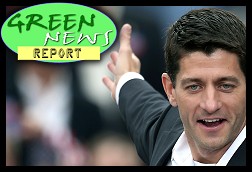 IN TODAY'S RADIO REPORT: Rep. Paul Ryan backs away - sort of - from outright climate science denial; Have we reached peak climate change denial?; Turns out natural gas isn't a bridge fuel to a low-emissions future; PLUS: Did a U.S. defense contractor really invent a compact nuclear fusion reactor? Separating fact from fiction... All that and more in today's Green News Report!

IN 'GREEN NEWS EXTRA' (see links below): Appalachian transition: coalfield residents must help themselves to diversify; Green groups sue over EPA GMO pesticide approval; Hanford nuclear workers reveal shoddy practices; Fact and fiction on the Arctic methane bomb; Risks of cheap water; Los Angeles mayor orders water cuts of 20% amid historic drought; Can Africa bypass the pollution phase of development?; Russian natgas shutdown would not hurt Europe; Autism again linked to air pollution ... PLUS: In Wisconsin, Dark Money Got A Mining Company What It Wanted... and much, MUCH more! ...